Blog - Latest News
You are here: Home1 / Newsflash2 / Interview with a Tiger 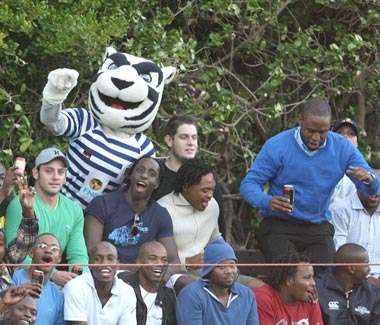 Ikey Tiger on the Green Mile
studentology.co.za the new website on ‘the science of students’ got a rare interview with the Ikey Tiger, our legenday mascot. “You’ve all seen him. The epitome of the Ikey Spirit. The towering figure that leads the Blue and White tide…

..As he struts along the Green Mile, girls lose all control and faint in his wake. I was lucky enough to get a little inside info on this enigma, as he paw’sed (haha!) in his day to answer a few Studentology questions. He’s a mans man… ladies man…man of the Mile.

That he’s a Tiger”

Sarah Koopman : Mr Tiger, thank you so much for taking time out of your packed schedule to do an interview with us.
Ikey Tiger : it is an absolute honour to have been selected to do this interview – in all seriousness, thank you very much! I do hope my answers shed some light. Tiger bows.

SK: You are very secretive about your identity, what is your kryptonite that if without you can be easily unmasked?
IT: I am not at all secretive about my identity. My paw prints are all over campus, my photos all over facebook and the Cape Argus front page! I am the Ikey Tiger, my alter ego is the Ikey Tiger and all the manifestations of my multiple personality disorder are Ikey Tigers apart from one – who is The Stig. That said, none of them are ‘funky’ haha!

SK: Are you from the same litter as Tigger for Winner the Pooh and the Frosties Tiger (they’re Grrrrrreeeeaat)?
IT: Tigger is in fact from the same litter as Pokkel the squirrel, the Maties scooter riding mascot – not many people know that. Thankfully! A disgrace to all apex predators, overweight, bouncy, striped squirrel. The Frosties Tiger on the other hand is grrreat. When he’s asleep.

SK: Most of your pics you are surround by a handful of really hot girls, do you care to explain?
IT: Explain their hotness? They’re from UCT!!! Hard to argue with logic.

SK: For the ladies (and some guys), can you explain the odd touching and grabbing that the boys do below the belt during a scrum? Is that why the team is so close?
IT: Yawn, no.

SK: Predict the score for the final?
IT: It will be a tight one – tight like a squirrel, but my expert prediction would be Ikey Tigers by 6, with Stellenbosch exploding in a Blue and White Tsunami at the final whistle.

SK: Growing up as a tiger in the real world, were you discriminated against for being an albino?
IT: I grew up in a perfect world where everything was Blue and White, so I fitted right in from day one.

SK: We know that the team trains extremely hard to be in the top form that they are, do you train with them? What is your training regime?
IT: I am naturally awesome, but have been known to do push-ups with hot girls sitting on my back.

SK: You have a killer pair of rugby thighs, are they the product of strenuous workouts or a gift of good genes?
IT: They are quite bus, I know – genes help, as do squads on the “Blue Floor” at the Sports Science Institute in between my lectures at the UCT BotZoo department.

SK: Do you wish you had an Ikey Tigress?
IT: 25 000 students at UCT, by definition 50% of them are female, so I think it is safe to say my solitary status shall continue – tiger style!

SK: Let’s talk about the team, who would you say is the biggest heartbreaker with the most groupies?
IT: The boys are all way too modest and have passed all heart breaking and groupie priviledges onto moi, I thought that was obvious, no? But, why don’t you decide for yourselves and do the poll on http://www.uctrfc.co.za – tell us who rocked the Green Mile the most in 2010 (hits, tries, runs, looks? you chose)

SK: Generally speaking, the rugby boytjies are UCT’s resident jocks. Who would you say is the leader of this elite group of athletic individuals? The Super-Jock that first year wife-beater-wearing-boys aspire to be.
IT: Generally speaking, this is where you are misinformed. The rugby boys are all decent guys with a strong sense of self and a clear purpose, on and off the field – be that in lectures or at Tin Roof. They just happen to look good in wife-beaters. At the Ikey Tigers, nobody is bigger than the team – myself being the exception of course. So to all the first year wife-beater-wearing-boys with Super Jock aspirations, enjoy your time in Stellies.

SK: It’s tough roughing it up on the lush greens of the Green Mile, who would you say works the hardest at keeping himself MANicured and MANscaped despite the mud? We’re looking for the Metromale, pretty boy on the team.
IT: I would have said, you have a whole backline to chose from, but I won’t. Ever notice those pink rugby shorts during the Varsity Cup? They have nothing to do with it.

SK: Are there any adventurous hands that do some exploring in a scrum?
IT: You have a scrum fetish, lady. I think you should come down for a scrumming session and see for yourself – crouch, touch and pause – ENGAGE! There have been unconfirmed reports about adventurous hands in maroon kit. But as I said – they are unconfirmed, so probably rubbish.

SK: Can you give us a brief summary of how the game works, for those of us who have no idea what we’re watching 30 guys do with a ball?
IT: First there was the Egg, not the Chicken that crossed the road and then a fat kid named William Webb Ellis picked it up and started running until he got tackled hard by Shaka Zulu. History became legend and legend became myth and in 1882 UCT joined in the fun and is since known for amazing running rugby.

SK: In closing, are there any wise words, rugby-related or otherwise, you wish to leave with the UCT community?
IT: Dear Ikeys, do it like me: In anything you do in the next couple of days, ask yourself: “Is this gonna help my team win the Final” and “Does it make me a better Ikey”.  Don’t forget to be awesome and don’t forget to wear blue and white on Monday night! A U A U A UCT! Love!

No changes for Ikey Tigerswhat a tiger! I might have a crush
Scroll to top