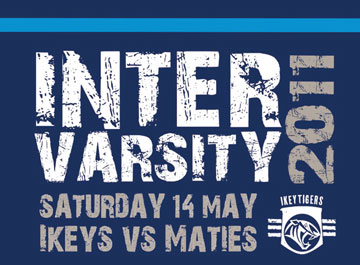 It is time for one of the Classic Clashes in South African rugby, when Maties host the Ikeys in Stellenbosch this Saturday for Intervarsity. Apart from a century of rivalry this match is of course also a case of the new vs the old Varsity Cup champion, which adds extra spice to the occasion and attaches even more bragging rights to the trophy that is up for grabs.

The proud UCT teams that are in action will be formally announced tonight at the UCT Clubhouse and the lineup of Intervarsity matches on Saturday are 13.45 3rds, 14.45 UCT Eagles and U20 A1 Trojans and 16.00 UCT Ikey Tigers vs the might of the Maties.

It has of course been a long seven years since UCT managed to lift the IV trophy in Stellenbosch in 2004, followed by a draw at Newlands in 2009. Kevin Foote’s charges – who were kindly hosted by UCT Vice Chancellor Max Price for a VC Champions celebration last night – are keen to add their names to the UCT history books and reclaim the coveted silverware which used to bring 40 000 people to Newlands. Foote says: “The guys are keen and we have been training well. We have four players away with the SA U20 squad, which is great for the club of course, that said having them available would have boosted the squad nicely in this important week.”

The immense rivalry between the UCT and Maties sides goes right through the ranks with the UCT Eagles and ISh Dramat XV set to put one over their young opposition and Gunner Hughes talented U20 Trojans looking to claim the Hedley Atkins Cup – a match which they drew 17 all last season.

Three times Varsity Cup champions Maties find themselves under a bit of pressure after not qualifying for the play offs in this year’s VC competition and they will look to lay down a marker in the Super League as well as Intervarsity. They have again been the form team – apart from a recent loss to Durbell and are topping the log after seven matches – UCT who had to start the league under strength due to the VC Final fixture overlaps are in third place with a game in hand.

The John Dobson coached Western Province team bowing out of the Vodacom Cup following a narrow and heartbreaking defeat to Natal frees up a number of class players for either team this weekend, so all rugby fans will be in for an intense clash of note.

Ikeys buses are leaving UCT’s Lower Campus on Saturday 13.00 / 14.00 and 14.30 – the Intervarsity Package includes the Bus Ticket, Match Ticket and facepaint @R50. Buses return late on Saturday night. Match tickets only are R20 – both are sold on Jammie Plaza at at reses Thursday and Friday.

Match tickets are also available at the gate.