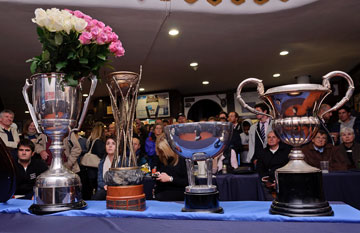 The only people at Groote Schuur on Saturday afternoon who seemed impervious to the cold were the players. The Ikey Tigers put on a dazzling display of rugby against Villagers, thrashing them 57- 20.

In a polished performance by the starting fifteen and replacements, JJ Gagiano and Don Armand were both outstanding. Nick Holton stepped in to fill the Golden Greek’s boots more than adequately, and Rick Rijs bamboozled Villagers repeatedly with his sniping forays from the back. As always, Nick Fenton-Wells led from the front. It was confirmation that this is a golden season for UCT rugby. Now, the goal is to win the league.

This columnist has waxed lyrical about the Ikey Tigers set up within the UCT rugby club as the driving force behind the success of the team, and the contribution by the UCT Rugby Club as a whole.

The other critical component has been the tremendous support from the students and rugby club followers. The response from ex players, Alumni, UCT families and various other benefactors, has made a tremendous difference to the fortunes of the club this year. The major benefactors have been recognized, but not nearly enough has been done and said to acknowledge and thank all those who signed up for the Ikey Foundation.

Now is the time to remember that without the many that cheerfully stepped forward and signed up, we would not have a way forward for the rugby club. You are the backbone of the support base of the club, and even if you cannot be at all the games, you are the guarantors of the 2011 success on and off the field. This is a watershed year; we intend to build on our success by nurturing all facets of the rugby club and the Ikey Foundation, and will tend to the crop during the long winter months between Varsity Cup seasons.

This column wishes to acknowledge the generous response from each and every person who signed up for membership of the Ikey Foundation. We thank you wholeheartedly for your generosity and support. UCT rugby needs your continued financial support and enthusiasm for the Ikey Tigers brand of rugby. As one of UCT rugby’s most illustrious sons, the one and only Basil Bey, is fond of saying: Quote: “ UCT play rugby for all round enjoyment; Stellenbosch play to win.” Unquote. This sums up the UCT philosophy. This year, the club has proven that with the right structures and people in place, anything is possible.

I would advise the young players leaving UCT at the end of this year, and who were part of the illustrious band of rugby brothers at UCT in 2011, that they savour every last minute of the rest of the rugby season and their time at UCT. Suddenly it is all over, and the realization that those were the very best years of your life only sinks in many years later, when the wind and sinew are not quite the same.

Whether one played rugby at UCT or not, we can all enjoy the magic of youth and UCT rugby by being a part of the club by supporting and contributing to its continued success on and off the field. We salute you Tigers.