Blog - Latest News
You are here: Home / Newsflash / Ikeys will take the points 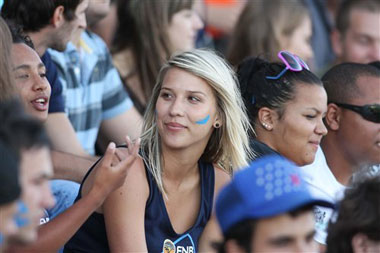 While the UCT Ikey Tigers may have been a bit off colour – the many fans on the Green Mile certainly weren’t  (photo: Fourie)

The University of Cape Town’s Ikey Tigers maintained their unbeaten run in the 2010 FNB Varsity Cup presented by Steinhoff International when they edged out a battling TUT Vikings outfit 25-19 at a very windy Groote Schuur on Monday afternoon.

The Ikeys, who were well below their usual standards, produced their worst performance of the year by some distance.

However, some credit must go to FNB TUT for the manner in which they managed to hang in against this talented UCT outfit – despite, at times, pushing the boundaries when it came to the battle for the ball on the ground.

The home side produced an error-riddled opening stanza – getting close to scoring on a number of occasions, only to concede penalties with the tryline in sight. They were made to pay for this – with three penalties and a converted try going against them in the first quarter.

UCT’s decision-making did not improve that much in the second half, but the ‘error-virus’ also seemed to affect the visitors as the game struggled to find any form or rhythm for much of the 80 minutes.

The best aspect of TUT’s game in the first 40 minutes was their defence late in the half, when the Ikeys pressed hard to take the lead.

In the second half, however; the error-strewn nature of the game continued, as both teams struggled with their option-taking and ball control.

The Ikeys wasted no time to open their account – inside 90 seconds – as Tim Whitehead strolled over after some half-hearted efforts at tackling the straight-running Tigers, impressive No.8 JJ Gagiano making it look easy with the try-scoring pass to his centre. It started with a penalty at a ruck, turned into a lineout – where Gagiano made all the running – and then Whitehead strolling through. Matt Rosslee made it 7-0 with the conversion.

Jaco Oosthuizen and Rosslee then exchanged penalties as the game moved on – 10-3 after seven minutes – and then Oosthuizen narrowed the gap to four points (6-10) with his team’s second penalty in the 10th minute. Oosthuizen, however, then made it a one-point game when he slotted a penalty from inside his own half in the 12th minute – 9-10.

But TUT captain Emile Verster then put his team in the lead, much to the home crowd’s disbelief, following a couple of penalties and a free kick at a lineout which brought them to within striking distance, before Verster barged over. Oosthuizen made it 16-10 for the visitors as the teams headed into the 20-minute water break.

Rosslee narrowed the gap to three points (13-16) soon after the restart as the high penalty count continued. The Ikeys flyhalf had a chance to level things in the 31st minute, but the wind pushed the ball past the uprights.

However, Rosslee squared it at 16-all with six minutes remaining in the first half, as the penalty count mounted against a TUT team lucky not to have been carded for repeated infringements after earlier warnings. The teams went into the half-time break without again troubling the men manning the scoreboard at the Green Mile.

Rosslee had an early chance to put his team ahead in the second half, after TUT centre Jaco Oosthuizen was yellow carded for injudicious use of the boot at a ruck, but the ball hit the upright. He made amends in the 48th minute, after yet another penalty at the ruck against the visitors, and the home team held a slender 19-16 lead.

The Tigers centre Marcel Brache had a shot from within his own half, but he misjudged the strength of the wind and it went well wide.

Oosthuizen, having returned from the sin bin, then managed to level the scores – again – as the end of the third quarter approached.

Replacement back Doug Mallett, the third kicker employed by the home team, then slotted a penalty from 60 metres out – as the wind carried it over with some distance to spare – to make it 22-19 and with less than 10 minutes remaining on the clock, he pushed another attempt across the front of the uprights.

With the penalty and free kick count moving well beyond the 30 mark for the match, another scrum penalty gave the selfsame Mallett a shot at goal with just about a minute left on the clock. He again pulled it badly, but it left TUT to launch one final attack from inside their own 22.

However, TUT conceded a penalty in their over-eagerness. The goalkicking reverted to the experienced man Rosslee, who slotted the penalty for a 25-19 win – not UCT’s best in their Varsity Cup history, enough to keep them in second place on the 2010 Varsity Cup log.