You are here: Home / History / Ikeys Who Have Played the All Blacks

With the rugby championships on the go and a home game against the All Blacks at Newlands for the first time in ten years (ahead of our sold out 2017 Black Tie Dinner), we thought it would be good to look at some of the Ikey stars who faced the All Blacks while wearing the Green and Gold.

Doc Cecil Moss is the oldest living Springbok and a favourite son of Ikey rugby. He is also a qualified medical doctor (anaesthetist) and was part of the medical team who removed the heart from the first heart transplant donor, Denise Duvall. He has 4 caps for South Africa in 1949. Educated at the South African College Schools, he developed close involvement with the University of Cape Town. Moss was vice-captain of the Springboks in 1949, when they beat New Zealand 4–0, and played four winning tests for South Africa, debuting on 16 July 1949. He was head coach of South Africa from 1982 to 1989 and achieved 10 wins and only 2 losses.

“I played for UCT and WP at centre in 1948 during my last year of University studies. I went to Natal in1949 to do my compulsory internship and captained Natal at centre. I was then selected as a wing to face the All Blacks — not only as a wing but as a LEFT wing.

The whole week was spent worrying about my to be opponent Peter Henderson a 10 second 100 metres sprinter acknowledged to be the fastest wing playing International rugby at that time. The only joy of the week was to be playing at Newlands where I had played all my University rugby. I knew the field and environment. Imagine my amazement on running on I saw that the All Black wings had changed over and I was now to mark their other wing Eric Boggs. Not that there was anything inferior about Boggs. He was a big, strong runner with a powerful hand off.

We won all 4 tests against the All Blacks in the series. Eric Boggs and I became very good friends often visiting one another.in our respective countries. In fact, in subsequent years when I was coaching at UCT I brought him up to the Green Mile and he took the Varsity practice. Sadly, he passed away a few years back.” 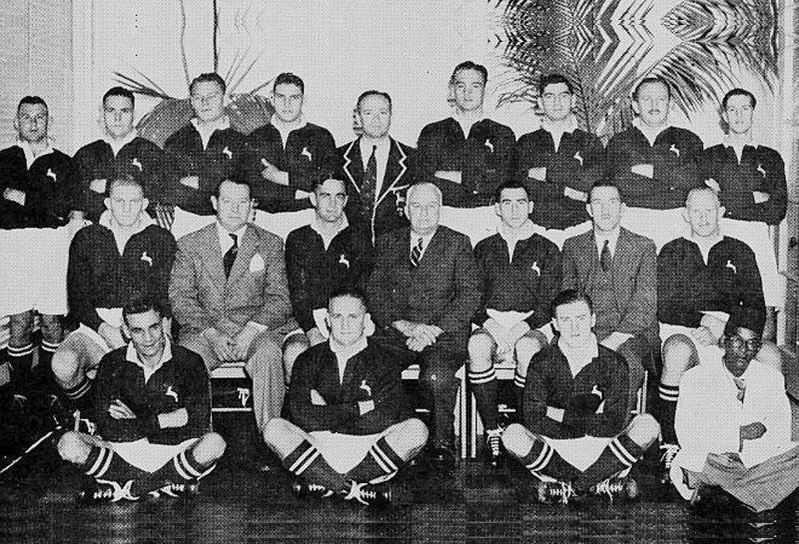 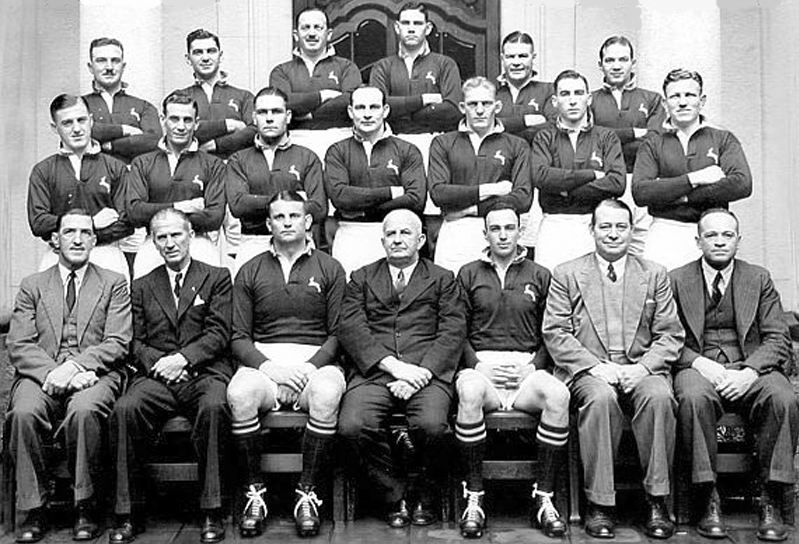 Also in 1949, Edwin “Carrots” Geraghty was selected for the fourth Test at St Georges Park after playing well against the tourists for Border. Edwin played for UCT during his studies but never made the first 15 as both UCT wings at the time played for Western Province.

Bertus Van Der Merwe played for UCT in the late 1940’s and played for the Springboks between 1955 and 1960, his last game being against the All Blacks in Cape Town on 23 July 1960. Bertus also toured New Zealand in 1956 and in a match against provincial side Taranaki hooked 10 tightheads! and rightly was South Africa’s man of the match.

Chris Pope who famously scored the winning try for Western Province against the 1976 All
Blacks played in the second third and final test against the All Blacks. The final game in
September 1976 also turned out to be his last game for South Africa. 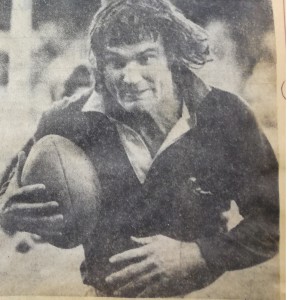 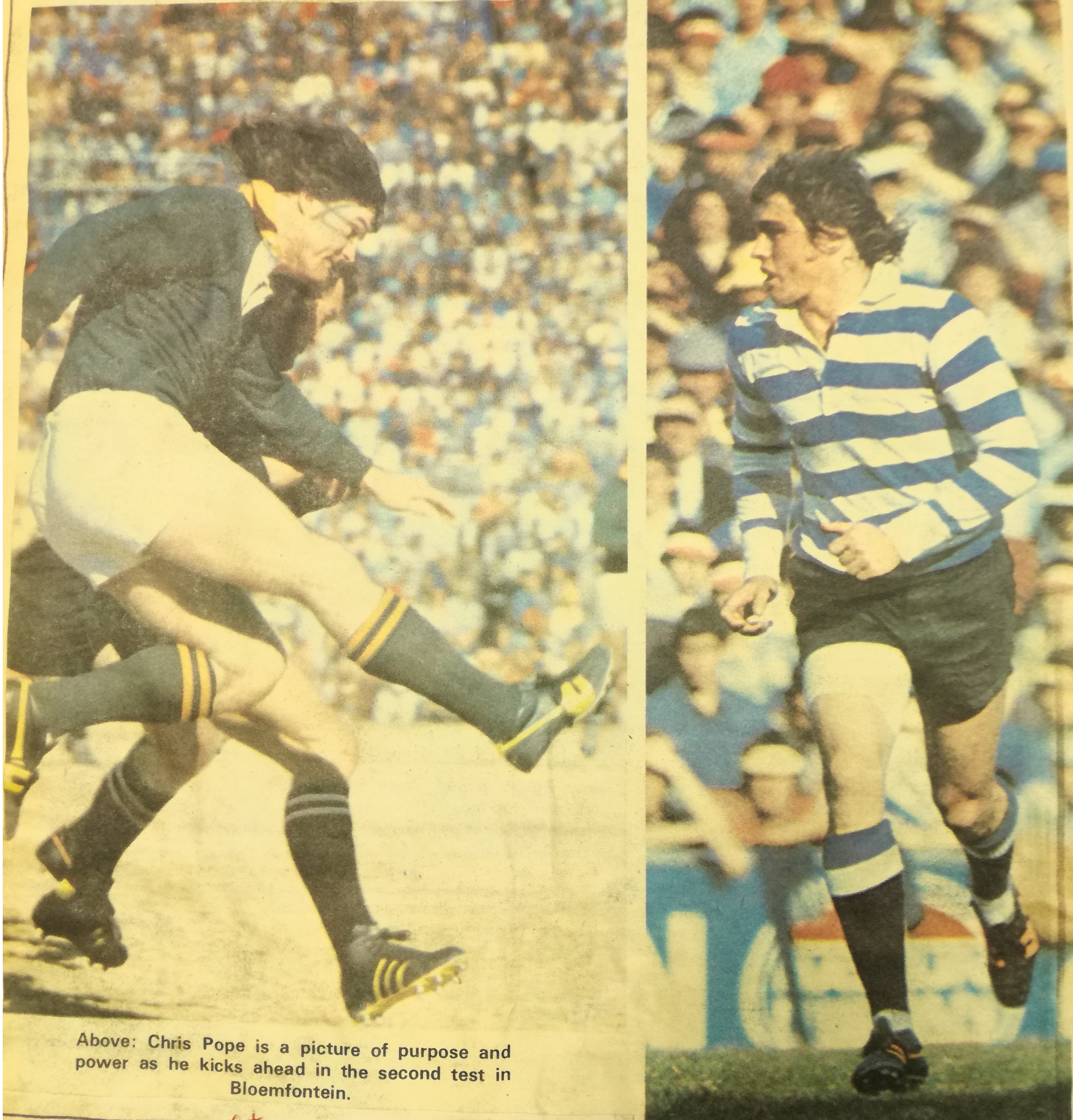 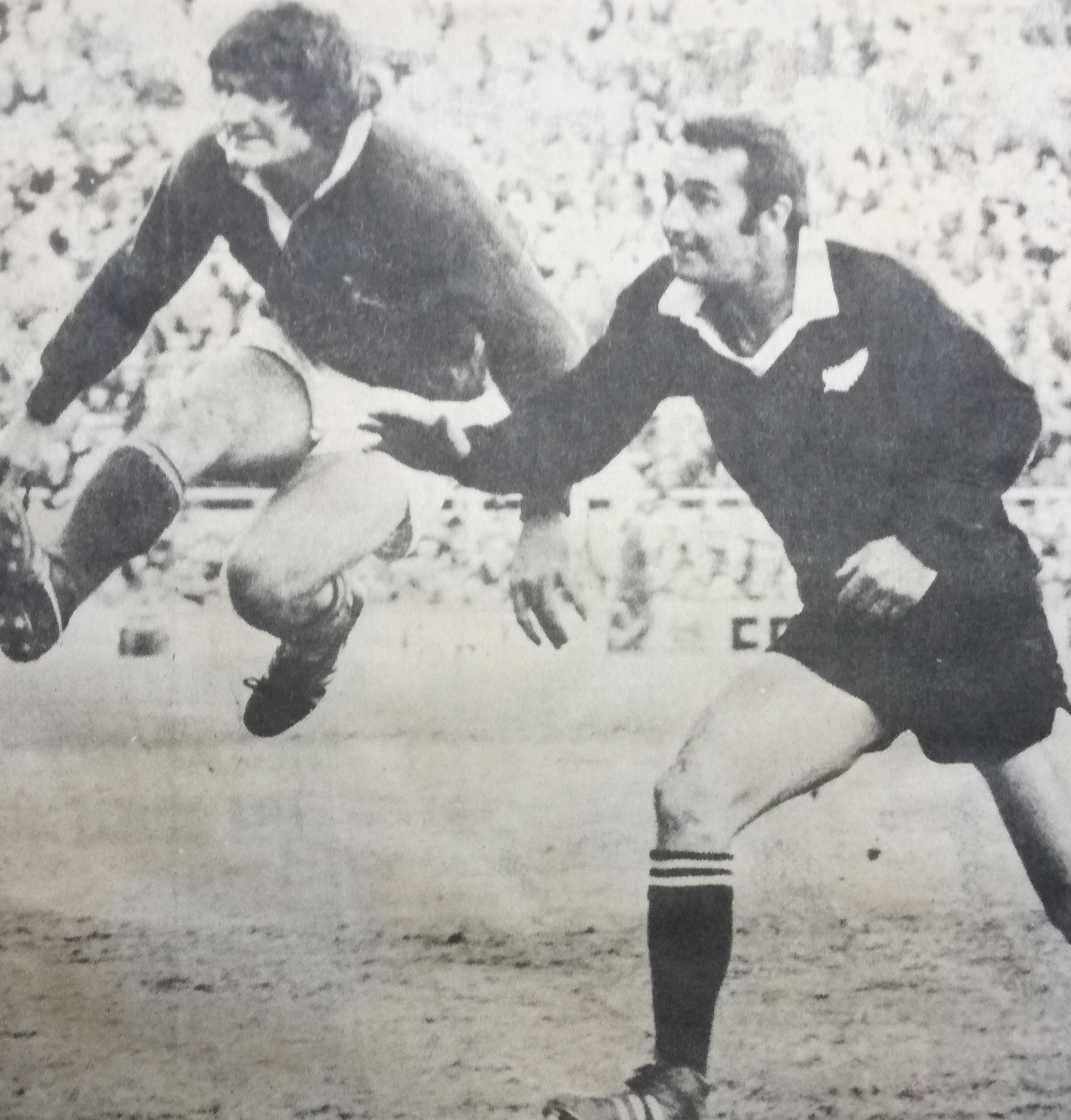 Tommy Gentles, a scrumhalf was the shortest player to have been picked for the Springboks at 1.60m. In 1956 Gentles was a member of the first Springbok team to lose a series in New Zealand. The series was characterised by foul play and the home team comfortably won it 3-1. He struggled to make the first XV at UCT as Dick Lockyear was preferred both for Varsity and Western Province.

Ian McCallum played in his first test at fullback in place of another Varsity great HO De Villers who had just retired. Ian played in the 1960 test series against the All Blacks, which South Africa won 3 – 1. Ian was the top point scorer with 35 points. There is an iconic photo of Ian patting Colin Meads on the head during the Newlands test after calling a mark.

Dick Lockyear, also a scrumhalf, made his Springbok debut v New Zealand at Johannesburg in June 1960, a game which South Africa won with Lockyear covering a try and slotting a penalty.

Derek Van Den Berg, the son of Springbok Mauritz who was part of the 1937 tour to New Zealand, played in two tests against the All Blacks in 1976. South Africa winning one and losing one of those tests.

Peter Whipp played at centre in the 1976 Springboks home series against the All Blacks. He played in the first, third and fourth tests. South Africa won the series 3 – 1, winning the last game by one point, going down 14 – 15. Whipp and his WP teammate Oosthuizen were a devastating centre pairing at the time. 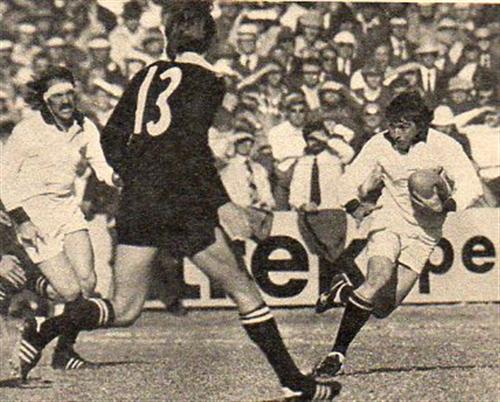 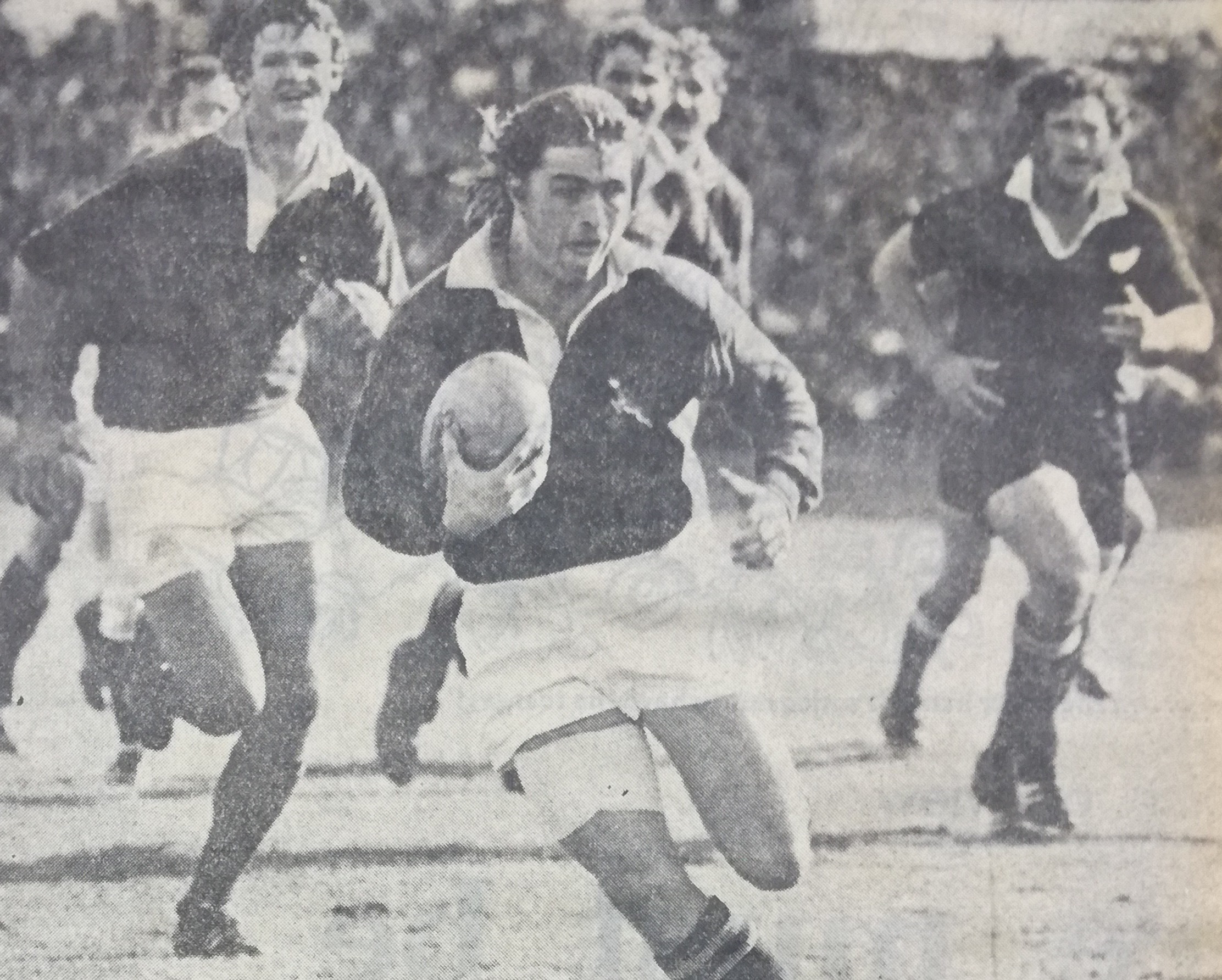 Andrew Aitken was an outstanding loose forward/No 8 who unfortunately was considered by some to be too small to be a Springbok. He played in two games against the All Blacks in 1998 the first in New Zealand and the second in Durban winning both games. His opposition player in the first game in Wellington was the great Michael Jones and in the Durban game Andrew was selected on the bench.

Robbie Fleck played against New Zealand a total of six times from 1999 to 2001, being on the winning side twice. Most notable was the game in August 2000 which South Africa won 46-40 with Robbie scoring two tries. That day the Boks scored a total of 6 tries against the All Blacks.

Keith Andrews played in one test, the final test, against the All Blacks at Auckland in August 1994 which ended in a draw. This was a three-test series with New Zealand narrowly winning the other two tests. Keith played at prop and one of the locks was his cousin Mark Andrews. This was also Keiths last test for South Africa. 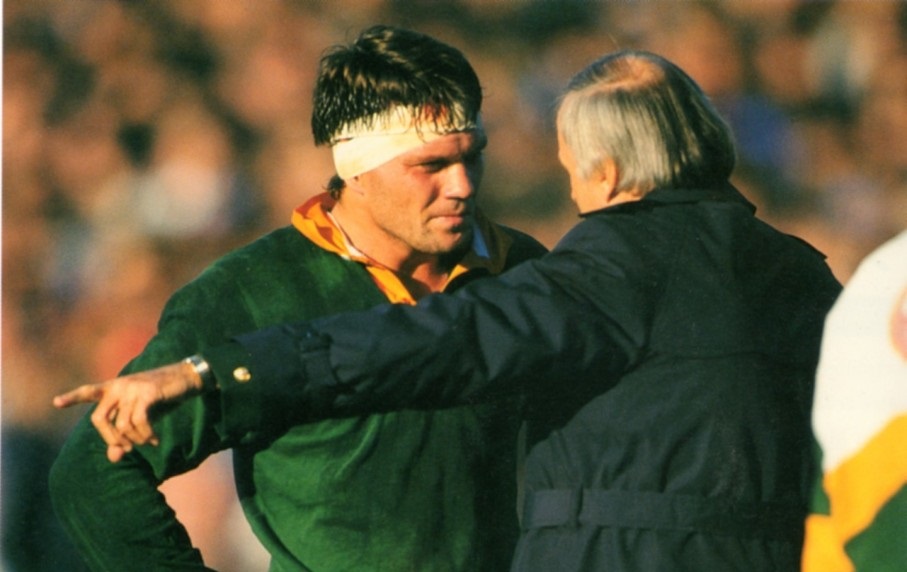 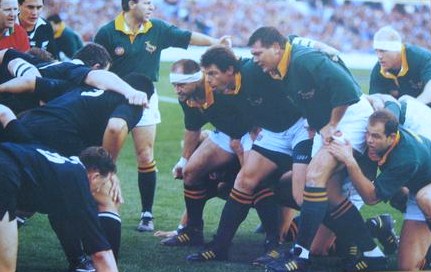 Although initially a Matie, Bob played for the Ikeys and has a strong affiliation with the club. Skinstad made his début for the Springboks as a replacement on 29 November 1997 against England. In all he played 42 tests for the Springboks, scoring 11 tries. He was a tri-nations winner with the Boks in 1998. He played against the All Blacks a total of 7 times, winning in his first two but losing the next five.

A star player for the Ikeys and a flyhalf with an educated but powerful boot, went on the 1994 Springbok tour of New Zealand, which turned out to be a controversial tour with some Boks getting red carded in matches and then in the second test prop forward Johan le Roux got cited and sent home for biting Sean Fitzpatrick’s ear.

Brent Russell the “pocket rocket” who was able to play any position in the backline, played three times for the Boks against the New Zealanders from 2002 to 2004, being on the losing side on all three occasions. Due to his versatility, he started on the bench for two of those games.

South African Universities vs. All Blacks 1976