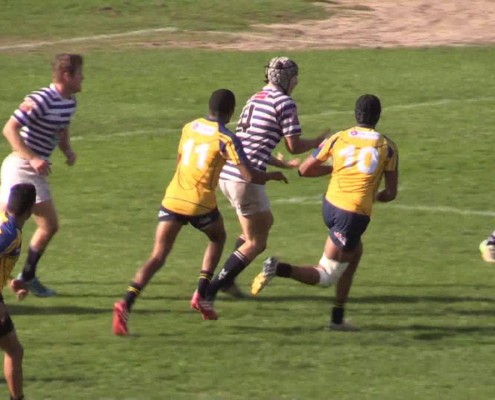 The FNB Ikey Tigers picked up their first win of their 2017 domestic league on Wednesday night when they handed FNB UWC a 27-22 defeat on their home ground. The team now have a two week break before facing off against rivals FNB Maties.

On a day that had seen a significant amount of rain, the FNB Ikey Tigers didn’t get off to a good start as they conceded a try within a few seconds of kick-off. However, the team kept their heads up and ensured that they walked away from the game with the win. There were players from both universities involved in Tuesday night’s Junior Boks vs. Varsity Dream team game, a match in which the FNB Ikey Tigers’ Nama Xaba came on to score as the Junior Boks won 50-19.

“They scored immediately, so that put us under pressure from the beginning. But once we got our hands on the ball, we really were the dominant team. We just kept them in the game by constantly giving away penalties,” said Christiaan Esterhuizen.

After their opening defeat to False Bay, coach Esterhuizen has applauded his team’s attitude in bouncing back with a win. “They [UWC] also scored right at the end of the game, but the boys showed their maturity last night. They took responsibility for our last result and really did their best to make up for it. It would have been nice to also get the bonus point, but we’re happy with the result,” said Esterhuizen.

As mentioned above, the team has two weeks off before they host the 2017 FNB Varsity Cup finalist FNB Maties. Things didn’t go the way of the boys in stripes the last time these two teams met, so this match presents itself as an opportunity for the FNB Ikey Tigers to show how far they’ve come since then.

The FNB Ikey Tigers that took to the field against FNB UWC:

A Peak Behind the Scenes with Howie Kahn
Scroll to top