Blog - Latest News
You are here: Home / Newsflash / Ikeys too good for Vics 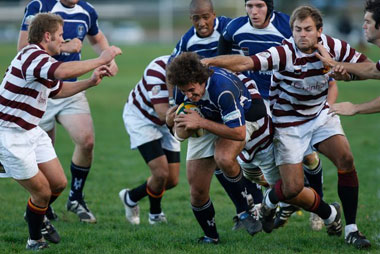 On the charge – Zandy MacDonald (Photo Peter van As)
The UCT Ikey Tigers showed they are well over their Varsity Cup blues, when they smashed a willing Vics team by 50:23 points on Saturday. UCT had too much to offer against the young Maties second team who are still sitting winless after three outings.

UCT playing in their blue “away” kit to accomodate the stripes of the visitors, started against a gentle wind in near perfect conditions and made their intentions clear from the start. The Tigers were building phases while Vics were happy to kick the ball for territory – UCT’s pressure was showing dividents early, when they went ahead 7:0 after just a few minutes of play.

The Ikeys were dominant in the line-outs and scums and impressing from the start led 21-12 at half-time - scoring three tries – with two tries scored by fit again skipper Nick Fenton Wells.

The Ikeys scored another four tries in the second half, with Winger Marcello Sampson weighing in with a brace. Powerhouse inside centre Sean van Tonder, replacement winger Zubayr Abrahams and outside centre Mark Estherhuizen also crossed the line.

Matt Rosslee, meanwhile, slotted six conversions and one penalty for a 15-point haul on the day with the final penalty from the touchline ticking the scoreboard over to 50 points.

UCT’s man of the match was livewire scrumhalf Nic Groom who was a crucial architect of the  the expansive game the students dished up.

Next up for UCT are the newly promoted False Bay who are riding high after edging 2009 champions Hamiltons and comprehensively beating Helderberg.