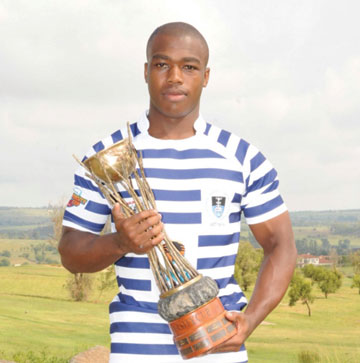 The long anticipated game will kick off at 5pm on the Green Mile and will be televised on SuperSport. Tickets are available at the gate and you are advised to arrive early to avoid parking issues.

The Shimlas albeit challenging every time have never beaten the Ikey Tigers in the Varsity Cup – a record coach Kevin Foote and his charges will do everything to protect.

New captain Ntsolo Setlaba who lead his charges in the pre-season friendlies against UWC and SA U20s will form a powerful backrow combination with the skilled Greg Mallet and the hard working Graham Knoop who has returned to the Ikeys.

Adrian Kritzinger who has trained with the Stormers in recent weeks will form a midfield partnership with new arrival Damian de Allende who previously played WP U19.  The 9 – 10 axis of Farrar and Holton is tried and proven from the successful WP Super League, as are wingers Steward and Winter. At fullback Dillyn Leyds, a talented former Bishops play maker makes his debut for the Ikey Tigers.

The tight five is a settled and experienced unit, with Levi Odendaal partnering up with the towering Pallo Manual in the second row and Wes Chetty – who was already involved in the 2008 VC scrumming down with the powerful Matt Paige and Shane Meier.

Vice captain Tiger Bax misses out with an injury.

The U20 Trojans team are playing the curtain raiser against their Shimlas counterparts at 3pm – kicking off the inaugural Varsity Young Guns Competition. Read more about it here

See you on the Mile!