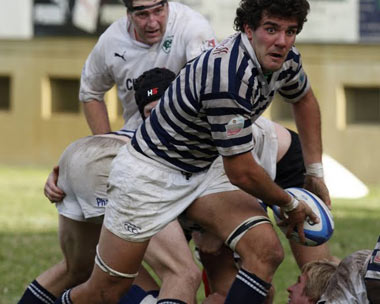 Back in action – JJ Gagiano (photo Peter van As)
The UCT Ikey Tigers have been reinforced by the return of a number of Western Province Vodacom Cup players, among them three with Super 14 experience in Hanyani Shimange, Martin Muller and Tiger Bax.

UCT being the only unbeaten side in the Super League thus far have a great opportunity to affirm their aspirations to be top of the log come the end of the first half of the league. For this of course every game needs to be won and none is more important than the one against Hamiltons who have just beaten Maties in impressive form.

Coaches John Dobson and Kevin Foote would have had a difficult task to select their side with so much quality to chose from. Shimange, Muller and Bax get joined in the starting line-up by hard running flank Jody Burch, loosehead prop Ash Wells and No8 JJ Gagiano who is back after a Varsity Cup time-out.

Bax who has had limited game time coming back from injury will take over at full back and is rearing to go, with utility back Marcel Brache moving out to the wing.

The game will be played at Oranjezicht rugby grounds – NOT at Hamiltons in Green Point – see map below.

See all kickoff times below.