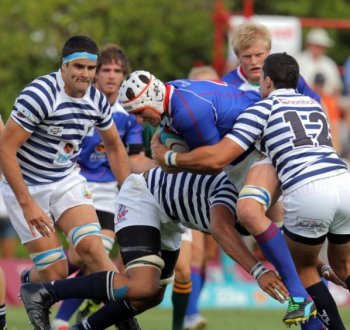 Lock Levi Odendaal (left) was the hattrick hero for the Ikeys
FNB UCT secured their place in the Varsity Cup next year by scoring nine tries on their way to a 60-21 victory over Varsity Shield runners-up FNB CUT at the Tuks Rugby Stadium on Monday.

The Ikeys were rampant, running in six tries in the first half before holding off a determined effort from the Ixias after half-time to cruise past the team from Bloemfontein who gave it everything but ultimately battled to keep up.

The Ikeys got on the front foot early on, launching a powerful driving maul straight up the middle of the field, but they were left stunned when CUT turned the ball over and stormed upfield to score the opening try.

Fullback Noel Marx joined the line at pace and drew two defenders before getting the offload away to flying right wing Alec Mhlanga who showed good finishing instincts to step inside the last man before going over for the try which was converted by flyhalf Jannie Mybrugh to give them a shock 8-0 lead.

The response from UCT was immediate, and although there was not enough evidence for the TMO to award experienced flank Don Armand a try, the scores were level at 8-8 soon afterwards when lock Levi Odendaal forced his way over the line near the poles.

Any thoughts of a tight game dominated by defence were banished when UCT added another two tries in a matter of minutes to take firm control of the game after just 15 minutes.

The first was sparked by a break from No.8 Rayn Smid who got the ball away to his captain Ntsolo Setlaba who shifted it on to Liam Slatem and the scrumhalf was able to stretch his legs to get over in the corner.

UCT had their tails up and put together another impressive passing movement to sweep into the CUT 22 where wing Mark Winter was able to scythe through the last line of defence for a converted try that gave his side a 21-8 advantage.

CUT gathered themselves at the first strategy break and managed to hold on to the ball and put UCT under pressure in their own half by crossing the gainline regularly.

Vice-captain Gavin Annandale followed up a solid driving maul by crashing over from short range, but that score was soon erased when Winter was put over for his second try at the other end of the field which took the score to 29-16 in UCT's favour.

The team from Cape Town were not done there and another two more tries, one from experienced prop Wes Chetty who got over on the left and another from wing Damian de Allende who finished a sweeping backline move on the right, extended their lead to 39-16 at the end of a frantic first half.

The game slowed down considerably in the second half as the pace of the first 40 minutes caught up with both sides who started making more unforced errors, and it was CUT who were able to capitalise when inside centre Leon Pretorius finished off a counter attack to go over in the corner.

The Ixias were playing with more confidence in the second half, and they managed to pin UCT back as they applied more pressure, but they were battling to make their dominance count on the scoreboard and the Ikeys were next to score when Odendaal went over for his second try which stretched their lead to 44-21.

Last year's Varsity Cup champions brought up their half-century when elusive fullback Dillyn Leyds loped over after a good break from flyhalf Nick Holton, and when Odendaal got over for his hat-trick try five minutes from the end the comprehensive rout was complete.