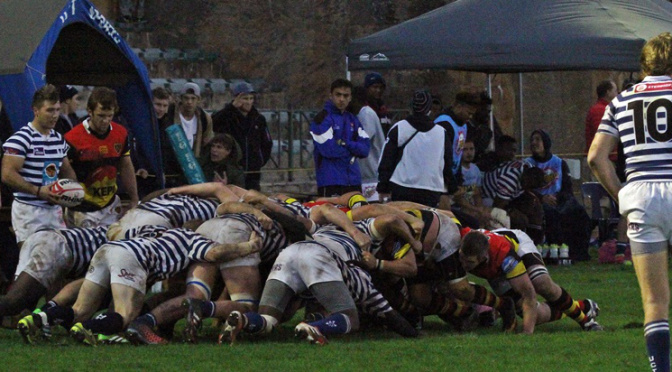 The FNB Ikey Tigers missed out on victory after an enticing back and forth encounter with league leaders Hamiltons on Saturday afternoon. The match ended 33-26 in favour of Hamiltons, and while they didn’t manage to secure all the points, FNB Ikey Tigers did manage to come out of the game with two bonus points in hand.

“It was a fantastic game of rugby. We just ran out of time at the end; had the match been two minutes longer, we really could have won the game,” said Christiaan Esterhuizen after his team’s inspired performance.

Both teams crossed the line on more than once occasion in the first half, resulting in the FNB Ikey Tigers trailing 19-14 at the break. “We scored first early on, and then we gave them two tries midway through the first half. We scored again ten minutes later, so the score was close going into the halftime,” said Esterhuizen.

The second half was much of the same, except it was Hamiltons who struck first after the break. “They scored first, but we caught up again. The score was 26-21 and then they scored again. We got one back towards the end but we just ran out of time,” explained Esterhuizen as the match ended 33-26.

This match was marked by a noticeably improved second half performance by the FNB Ikey Tigers, who hadn’t been finding it all that easy to find their rhythm during the second half as of late. “We’ve had issues with our second half performances, but the boys had a fantastic second half on Saturday. We did a bit of work with our mental coach, and the players’ attitudes were much better. They performed for the full eighty minutes,” explained Esterhuizen.

Producing such an improved performance against the current top team in the league will undoubtedly boost the team’s confidence, and one can only hope that they will carry this momentum into their last four remaining games before the midseason break.

Ikeys ready to take on the league leaders