Blog - Latest News
You are here: Home / Newsflash / Ikeys on fire in PE 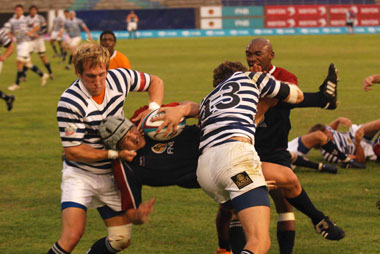 No way through – Stu Commins and Tim Whitehead ensuring the home team stayed try-less
The UCT Ikey Tigers were too good for FNB NMMU in their Varsity Cup – and Monte Taljaard Trophy – match in a windy Port Elizabeth on Monday evening, with the fired-up visitors winning 65-9 in a 7 try rout.

The match, once again played in honour of the late Monte Taljaard (the talented PE-born Ikeys flanker who passed away in a car accident in 2008), was a fairly one-sided affair as the Men from Cape Town showed their intentions early on – despite the stop-start nature of the game.

Powerhouse inside centre Sean van Tonder was the first player to make some serious inroads for UCT and his powerful leg drive saw the ball recycled to the left where hooker Mark Goosen crashed over for the game’s opening points in the fourth minute.

Flyhalf Matt Rosslee converted for a 7-0 lead, which soon became 10-0 through his first penalty goal effort.

The home side opened their account shortly after when Willem Laubscher – playing at inside centre, instead of his regular flyhalf position – chipped over a penalty after a UCT infringement and at 3-10 down the Madibas would not have felt too unhappy.

That all changed, however, after a moment of brilliance from new Ikeys loose forward Yaya Hartzenberg, the big man chasing and gathering his own kick ahead before feeding a nice inside ball to a charging Tim Whitehead, the No.13 making no mistake by dotting down and Rosslee converting for a 17-3 advantage.

Laubscher narrowed the gap to 6-17 with a well-taken drop-goal, but the Madibas had no answer to the pace and outstanding running lines of UCT fullback Therlow Pietersen who slashed through their defence on an arching run.

Pietersen was bundled into touch on the Nelson Mandela Metropolitan University goalline, but the visitors disrupted their lineout at the tail and Hartzenberg crashed over for the third UCT try.

The selfsame Hartzenberg got into the act one more time before the break to stretch UCT’s lead to 30-6 at half-time – more importantly, however, the Capetonians had also managed to pick up a four-try bonus point in the process; their first of the 2010 FNB Varsity Cup presented by Steinhoff International.

NMMU No.12 Laubscher scored the first points of the second half to narrow the score to 9-30 after 43 minutes of play, but Hartzenberg scored from a scrum soon after to complete his hat-trick for the Ikeys in a superb all-action and muscular individual display by the No.6 flanker.

Tim Whitehead then picked up his second try of the night and replacement hooker Matt Page – in his first taste of Varsity Cup action – also added his name to the scoresheet from a set penalty move and, at that stage, Ikeys coach Dobson would have been happy with his team’s work on the night at 51-9 up.

However, UCT were not done yet and, more specifically, neither was Man of the Match Hartzenberg as he picked up his fourth try (incredibly, the second time a loose forward has done it in the 2010 Varsity Cup) thanks to a neat bit of work from replacement back row forward Greg Mallett.

Young Mallett was then rewarded for his good work in the lead-up to Hartzenberg’s try by scoring one himself – his first at this level – as Rosslee added his seventh conversion for a match-haul of 20 points.