You are here: Home / History / Ikeys Make A Difference

Some years ago Dave Van Renen was in Cape Town catching up with friends and Ikey rugby.

The customary gathering of the Ikeys from his era enjoying reminding each other of how amazingly good they were on the rugby field, back in the 1960s, was refreshingly spiced up by including the modern generation, represented by Donovan Armand, Marcelle Brache and a delightful fellow called Nesi. All three were recipients of the Bursary Fund established by Dave and Heath Van Renen in memory of their son, Charley, who loved life and rugby before it was cruelly snatched away from him. 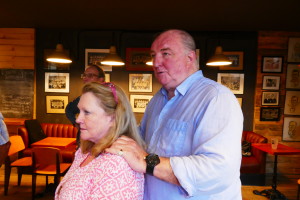 A few weeks ago Dave and Heath were joined by a clutch of old friends, and the latest recipient of the Charley Van Renen Bursary Fund, Ashwyn Adams. A number of those present were members of the highly successful UCTRFC Tour of the U.K and Europe in 1968, a scant 50 years ago. One of the welcome visitors was Ken Dovey, who lives in Sydney, Australia. Ken was a very good rugby player, but more importantly, a classic example of an Ikey who grabbed the opportunity, against tough odds, to combine his sporting talent, originally fine-tuned at Selborne College, East London, with successful study at UCT to go on to become a world class motivational speaker and lecturer to corporates and universities.

UCT rugby is different because it inculcates so much more than maximisation of an individual’s rugby capability. Rugby at UCT has always been a bridge for character development, the inculcation of a lifelong empathy for fellow human beings who share the timeless values of Roman poet, Juvenal’s wisdom contained in his famous quote, ‘Mens sana in corpore sano.’ The accepted literal translation is, ‘a healthy mind in a healthy body.’ This can be construed to mean that only a healthy mind can lead to a healthy body, or equally only a healthy body can produce or sustain a healthy mind. As we are not all Stephen Hawkings, the most practical application is that of a hierarchy of needs, with physical and mental health as the base.

Too many precociously talented sportsmen wander off into a deep void once the fame and glamour of their sporting careers fades. Ikeys go on to make a difference in the world, in diverse careers, in so many places, and very often with the remarkable women they met at UCT. The people featured in the photos attached to this piece have known each other, some better than others, for more than fifty years. They share a common bond. UCT and rugby at UCT. 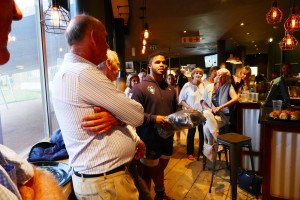 The introduction of a fresh young mind and body into the not quite so young collection of men and women was a refreshing reminder that the aspirations, ambition and values of Ikeys remains undimmed by the effluxion of time. From an Ikey icon like Louis De Waal, the captain of the 1968 UCT Past and Present Touring Team to the U.K and Europe, to Ashwyn Adams, Ikey values and traditions remain as a path from student to a life well lived. Another pre- Socratic philosopher, Thales expressed it eloquently when he said, ‘What man is happy? He who has a healthy body, a resourceful mind and a docile nature.’

I am not so sure about the docile nature when it comes to playing rugby and the game of life, but we believe that Ikeys learn how and when to switch from docile to demon.

Part of the English translation of Juvenal’s poem goes:

‘You should pray for a healthy mind in a healthy body
Ask for a stout heart that has no fear of death
And deems length of days the least of Nature’s gifts
That can endure any kind of toil.

That sounds pretty much like the archetypical Ikey, with an added dollop of zest for life, family and friends, a good laugh and a few beverages after a good game.