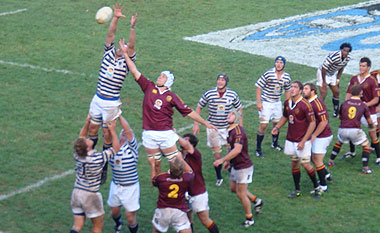 The Ikeys have been thrown off the pace in their WP Super League campaign by consecutive losses to Durban-Bellville and Hamilton's so they will be determined to make a statement at the Danie Craven Stadium this weekend.

Victorians have at times been an uncomfortable opponent for UCT, with the young Maties second team generally looking to spread the ball wide and run as much as possible, but the Ikeys will consider this a must win, this late in the season.

Coach Kevin Foote has made a few key changes to his team as they look to turn things around and build momentum for next weekend's Intervarsity at UCT.

Paul Cohen switches from the right wing to fullback with Dylan Sage taking his place out wide as Andrew Norton shifts to the midfield where he will link up with Nathan Nel.

In the pack young Josh Katzen moves from blindside to openside flank in place of Ntsolo Setlaba, with James Tatham coming into the starting line-up in the No.7 jersey.
In the front row big Chris Heiberg shifts across to loosehead prop, which means that Digby Webb gets an opportunity to start at tighthead.

On Saturday the 1st of September UCT will host Maties in what will be the first multi sports Intervarsity since 1993 and the rugby side will be eager to take center stage as this great clash gets a long awaited revival.