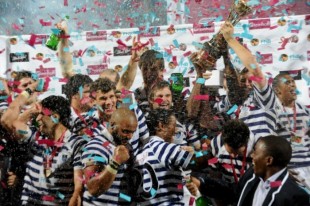 FNB UCT staged a dramatic second-half comeback to beat FNB Tuks 26-16 at home in a hard-fought final and lift the Varsity Cup for the first time.

Not only did UCT score two tries but on two other occasion they were close enough for the TMO to be called in, though on both occasions he turned it down. Nick Groom had just not made it and Marcel Brache had a bit of trailing limb on the touchline nanoseconds before he touched down.

In the first half Tukkies did everything better. They attacked the tackle better, kicked better, scrummed much better and lineouted much better – and led just 16-10 at half-time and went pointless in the second half.

Tukkies were a bit diffident for a bit longer and then they got right on top. Ikeys had little possession and what little they got they booted to the eager Tukkies. In addition UCT conceded a string of penalties, mostly at the tackle. Wesley Dunlop, Tukkies’ flyhalf and captain who has an excellent boot, goaled two to make the score 7-6. He also kicked UCT into awkward positions.

Dunlop kicked his team into a good position. Ikeys lost the line-out and were penalised. From a five-metre line-out the Tukkies bashed and then went wide for Jean du Plessis to cut through and score. Dunlop converted. 13-7 to Tukkies. There seemed no way UCT could win this match. They were well and truly out of it.

Tukkies harassed UCT who made mistakes. Even the reliable Dimitri Catrakilis made mistakes. When he failed to kick a penalty out, the Tukkies came running back and UCT defended again. They were penalised at a tackle again and Dunlop goaled again. 16-7 after 36 minutes.

The kick-off got the Ikeys into the Tukkies’ half and on the stroke of half-time Catrakilis goaled. 16-10. There was an air on unreality about the score.

There was no air of unreality about what happened in the second half as the Ikeys abandoned meaningless booting and played with the ball in hand. Now it was the Tukkies’ turn to defend and their turn to concede penalties. When Vincent Kock knocked Groom over late, the Ikeys attacked from the penalty and Groom was so close it took the TMO to say he had not scored a try. But Catrakilis goaled a penalty. 16-13 after 50 minutes. He did it five minutes later when Warwick Tecklenburg was penalised at a tackle. 16-all.

Back came UCT  with ball in hand and close support till they were bashing at the Tukkies’ line on the left. They went right and hooker Page, pretending to be an outside centre, scored a try which Catrakilis converted. 23-16

The Ikeys came back on the attack as Eben Etzebeth burst clear and strode down the field., The Ikeys went right and Brache dived for the line. He grounded correctly but the TMO detected an error in his trailing flesh. This gave the Tukkies a five-metre line-out which, rattled now, they threw in skew. UCT may have been better advised to opt for a line-out but they chose a scrum. They bashed, the Tukkies were penalties and Catrakilis goaled. 26-16 with 10 minutes to play.

Those 10 minutes were spent on the UCT line as the Tukkies’s attack was fuelled by penalties, five-metre scrums and bashing. Twice they were held up over the line. Their sequence of 19 bashes ended when they lost the ball with 20 seconds left. But even then it was not over as they got the ball, UCT were penalised and the noble Tukkies strove again to score till a knock-on was a signal for the final whistle and much UCT glee and hugging and dancing around.