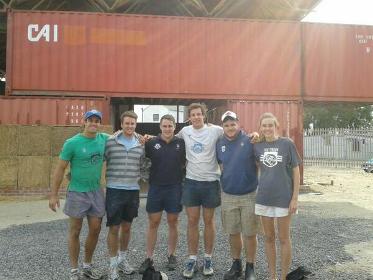 Over this vac, when the Ikey Tigers aren’t at the gym, on the field, or busy in preparation for next year’s Varsity Cup, they’re giving back to their Cape Town community through a special group at UCT entitled Habitats for Humanity.

Last week Wednesday (they’re day off from training) Michael Kennedy, James Kilroe, David Marsch, Paul Cohen and Richard Stewart all got involved with the group on a project they have been working on of recent, run by two German students.

The project entails building a Children’s Theatre behind the visitors centre in Langa. On Wednesday the boys did some welding, cutting of boards and the sort, all working towards the common goal of the theatre, and all on a volunteer basis. On-and-off skipper from last season, Richard Stewart, raved about the outing saying, “It was really enjoyable and an awesome experience.” He hopes that this week even more of the team will get involved and put their sturdy strength towards such a good cause.

He went on, “this is hopefully just the start of what we hope to get involved in as Ikey Tigers and as people. It is good to find the guys who are keen to be involved and give back now so we can progress in what we do as a group.”

With so many of the guys involved “it is also a great team building activity as the guys got to know each other and grew together which is invaluable experience,” he said.

Such positive endeavours in the midst of their mid-season training are brilliant for the side as a whole and for those whom they are helping out.