In March 2017 the Steinhoff Cobras were crowned Steinhoff Koshuis Premiership champions. The team from UCT have now gone unbeaten for two consecutive campaigns. Below, Ty Wills, who is both Captain and Manager of the side, gives us some background on this year’s campaign.

The Cobras’ last appearance in the Steinhoff Koshuis Varsity Cup in 2015 had been a tough venture against stiff competition from Stellenbosch and up North in Potchefstroom. We had hoped to prepare better in order to put in a better showing with a slightly more favourable fixture list for our return to the tournament in 2017. Unfortunately the delayed nature of the start 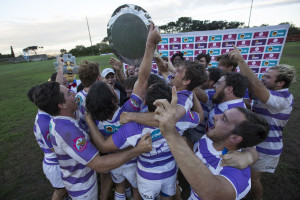 of the University term in Cape Town made this impossible and thus we threw together a side for our first game, having played one game of 8 on 7 touchies in preparation.

We kicked off the campaign against the Wits Titans on the famously windy Green Mile and managed to shake off the cobwebs sufficiently both on the field and in the changing room celebrations after. The team was a real mix of characters from all around the country, but coming together on the field was no problem as we moved into our next game against the UJ Chiropractors two weeks later on the green mile once again.  We decided to stick to our one -touch-game-only practice policy with the busy O-week schedule at the time. We fortunately also managed to stick to our expansive brand of running rugby and started to hit our strides. Both visitors were seen off fairly comfortable in the end scoring a cumulative 45 points and conceding 15.

The most memorable memories of our season came from our tour to Port Elizabeth to play the NMMU Harlequins. By now our fines songs had become well established and the ability of one our players to obtain free beer from the airport hospitality lounge allowed him to fill up the team water bottles and made for an entertaining shuttle ride to the plane. The mood in the camp improved even further at the sight of our luxurious hotel rooms and all-expenses paid meals (something which is never underestimated by a student). A few of our larger players tested the abilities of the all-you-can-eat buffet and the Maties Young Guns team staying in the same hotel only just managed to find some food for themselves.  We decided to do some exploring the Sunday night, which unfortunately resulted in some late nights, heavy losses in the casino (for students, a heavy loss is R50) and the discovery of the only open bar on a Sunday, Beershack. The team was a wounded one the following morning but would never miss a breakfast spread. This was the only appearance of the day made, however, before our bus left at 14:00 the next afternoon. The sight of our team was definitely a sorry one and the warm up was hardly of high intensity with our two travelling coaches more the social media managers of the team than the tactical geniuses behind our success. Somehow The Cobras managed to pull off yet another win despite a broken leg to our mercurial number 8. The team were revived by the victory against a good and well-trained NMMU side. Many memories were made at the fines session and in a return visit to our now favourite place, Beershack.

Being 3 from 3 in the round robin stages, we faced off once again with the NMMU Harlequins in the final, this time on our home ground. Running rugby was the order of the day, with The Cobras boys putting together our best performance of the tournament. The Harlequins were unable to stop us from picking up the tempo in the second half, as we ran in a total of 39 points, making The Cobras the Steinhoff Koshuis premiership champions for 2017! It was an unbelievable experience for social rugby players and we cannot thank Steinhoff enough for this incredibly enjoyable tournament. The memories and teammates made will stay with the guys for a long time.

Four Ikeys Called Up for Springbok Squad
Scroll to top