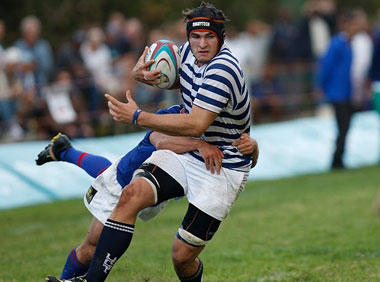 Don Armand and co, determined to win silverware with WP

FNB UCT RFC are very well represented in the Currie Cup Final, with a total of seven Ikeys at Kings Park on Saturday.

On the bench for WP:  Marcel Brache (center)

For the Sharks:  Tim Whitehead (center)

All of these players  played for the Ikey Tigers in the 2011 Varsity Cup final at Tuks – the exception is young Damian de Allende who only joined UCT in 2012 and featured in the 2012 Varsity Cup.

Eben Etzebeth of course is a multi award nominee in 2012 following his meteoric rise from Varsity rugby to the Springboks within a year.

Damian de Allende who mostly featured for John Dobsons WP U21 team during the Currie Cup is a youngster and a surprise selection, who many expect to shine in the final.

Dobson explains: “If anyone has the mentality to play in this final it is him, like if he comes down to the U21s from the Currie Cup side and you ask him if he is disappointed he will say ‘no man, I just want to jol’.

“To my mind, he decides if he wants to play for South Africa or not” said Dobson.

Dobson will certainly miss the game breaking backline player, but has announced a strong team of his own for the final against the Blue Bulls – naturally there are a number of Ikeys included:

The likes of Scarra Ntubeni, Steven Kitshoff, Frans Malherbe, Eben Etzebeth, Wilhelm van der Sluys (the designated U21 captain this season) and mentioned Damian de Allende – all of whom are involved in the senior Absa Currie Cup Final for DHL WP – are all still eligible for this WP Under-21 team, as are injured Ikeys loose forwards Nizaam Carr and Siya Kolisi.

We look forward to an exciting final!