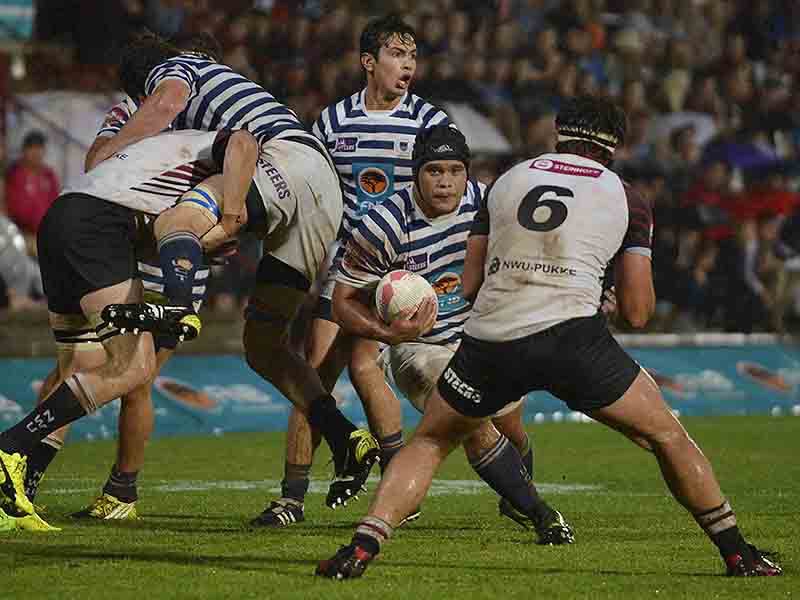 The FNB Ikey Tigers failed to pick up their third win on the trot as they went down 20 – 15 to NWU Pukke on Monday night. The team only managed to cross the try line in the dying moments the match while FNB Pukke did so once on either side of the halftime break in a rainy Potchefstroom.

The home team started the game on the front foot, testing the FNB Ikey Tigers’ sturdy defence as they scored and converted a try in the third minute of the game. The only points the FNB Ikey Tigers managed to register in the first half came through a penalty kick courtesy of Lohan Lubbe. FNB Pukke went into the break leading 13 – 3.

“On Monday night they managed to start better than we did. They did their homework incredibly well, contesting all of our lineouts and some of our plays, so we were on the back foot from the beginning” said captain Jason Klaasen.

FNB Pukke then started the second half in the same fashion as the first, but it was the Ikeys who got on the scoreboard first via another penalty. The home team then crossed the try line again, stretching their lead to 20 – 6. Upon his return from injury, lock Gary Porter finished off an attack worth seven points in the 81st minute, epitomising the way in which the FNB Ikey Tigers fought until the very last minute.

“As a team, we are disappointed because we know that if it weren’t for those small errors, we could have easily won the game. We put in a lot of hard hours going into the Pukke game, so it’s unfortunate about the result, but we’re still incredibly positive going forward with Maties this coming Monday. We’re looking to improve on where we went wrong and get the win,” Klaasen concluded.

Up next for the FNB Ikey Tigers is the clash against rivals FNB Maties, scheduled to take place on Monday, the 27th of February at 16:45 at the Green Mile.

Ikeys On The Road Again