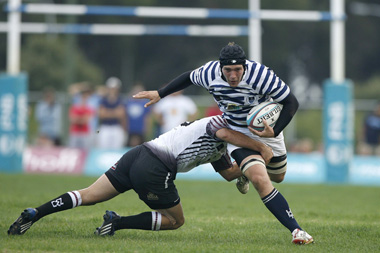 The two-tries-to-one win, at UCT’s infamous Green Mile, was well deserved; even though the Ikey Tigers were made to work very hard by last year’s losing finalists.

It also ended the FNB Pukke’s stranglehold on the Ikeys – who were beaten twice last year by the Potchefstroom-based team. It was also, for the record, the biggest-ever winning margin between these two teams in the Varsity Cup – showing just how closely-fought all their encounters have been since 2008.

The previous biggest winning margin was six just points, ironically the first time they met in the Varsity Cup – Pukke winning 23-17 in 2008. Since then, UCT went on to beat Pukke 32-31 (in their dramatic 2008 semifinal meeting later that year), before the Men from Potch gained revenge twice last year – at home and away, the latter, of course, being the semifinal in Cape Town.

On Monday the game turned on little moments and after taking an early 6-0 lead, having played with a very strong wind at their backs, the Pukke had to watch the Ikeys score 18 unanswered points.

The first UCT points came from a try inside the final 10 minutes of the first half – leaving Pukke with a narrow one-point (6-5) lead into the half-time break. Another try – which was converted by Matt Rosslee – and two long-range penalties saw the Ikeys take charge.

The turning moment came immediately after the break, as the Ikey Tigers showed their superior tactical appreciation of playing with the wind – Rosslee giving a neat little grubber that resulted in a scrum near the Pukke line, which – in turn – resulted in a Dayne Jans try.

Apart from their superior tactics, the incredible Ikeys defence – which held out the Pukke raids for long periods in the second half – also swayed the game in the home team’s favour.

When Pukke were playing with that strong wind at their backs in the first half, the Ikeys opted for a ball-in-hand approach. However, their handling let them down on a number of occasions. The strength of the wind was best illustrated when ordinary passes were blown metres forward.

While Ikeys dominated the possession in the first half, they were let down at times in the lineouts – where at at-times hesitant Dayne Jans conceded a few free-kicks for delaying his throws. Pukke had their moments in the first half, but they also struggled to control the ball, while the Ikeys’ in-your-face defence was also very effective.

However, it was the play of the UCT forwards that was the standout feature of the first 40 minutes. They not only dominated their much-vaunted opponents at the scrums, but they looked more dangerous in carrying up the ball.

Most of the credit has to go for the enormous amount of work the Tigers loose trio of JJ Gagiano (the official Varsity Cup Man of the Match), captain Nick Fenton-Wells and Yaya Hartzenberg got through. You could see why a player like Hartzenberg played in the Stormers fringe team at the Cape Town Stadium at the weekend.

Pukke’s best attacking weapon was a very effective rolling maul, but with a lack of possession and very little territorial advantage, they had few opportunities to use it in scoring territory. Their best back was classy scrumhalf Andries Mahoney, who was also one of his team’s star performers last week.

Matt Rosslee had an early shot at goal, but his attempt drifted across in front of the upright as the strong wind pushed it back. However, the Pukke opened the scoring in the 13th minute when fullback Theuns Kotzé slotted a penalty – coming after the home team was penalised at a scrum inside their 22-metre area. It was the Pukke’s first visit to the Ikeys 22.

Just as the first quarter came to an end, Theuns Kotzé slotted his second penalty in another rare visit to the Ikeys territory for a 6-0 lead.

UCT opened the try-scoring, in the 32nd minute, after Marcel Brache collected a bouncing ball, after a great little grubber from Rosslee. The conversion attempt failed, but the home team would have been happy to keep the gap that close into a strong wind. They took that 5-6 scoreline into the half-time break.

And the Ikeys hit the lead two minutes into the second half – when Pukke No.10 Niell Jacobs fumbled a bullet-like Andries Mahoney pass inside his own in-goal area and Ikeys No.2 Jans pounced for his team’s second try. Rosslee’s conversion made it 12-6 to the home team.

Rosslee had another shot at goal five minutes later, but he just allowed too much for the wind and it drifted wide. However, five minutes later try-scorer Brache made it 15-6 with a monster penalty kick from inside his own half.

That 15-6 scoreline then became 18-6 when replacement flyhalf Douglas Mallett also slotted a penalty from inside his own half.

Pukke eventually got rewards for their impeccable driving, when skipper and lock forward Dirco Rautenbach scored a try from their umpteenth maul close to the line. The conversion was literally blown back from the line, but at 11-18 they were still very much in the game.

With time up on the clock, Mallett had another shot from inside his half and while this one was wide, it was deep enough to end the game – a deserved 18-11 win for the Tigers who – briefly, with three others matches to follow – moved to the top of the Varsity Cup standings.

Dobson benches Stormers duo A U a U a UCT ! look who’s on the scoreb
Scroll to top