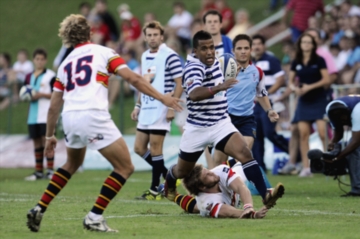 Last year’s losing finalists, the UCT Ikey Tigers, kept up their proud Varsity Cup record by sneaking into their fourth successive semifinal courtesy of a dramatic 19-17 win over Tuks at the LC de Villiers Stadium in Pretoria.

The visitors were outscored by three tries to one, but a Marcel Brache try – from a Tim Whitehead break – saw them nudge into the lead in the 66th minute and they held out for their fifth, and no doubt most crucial, win of the season.

It meant another semifinal finish for UCT their opposition Tuks also made the cut. Just seven days ago had set the tongues wagging with a fine home win over the defending champions Maties who’s loss to UJ tonight in Stellenbosch saw them drop to fitth place and out of contention for the first time.

The victory also saw the UCT students side move into second place in the log, trailing high flying UJ. The Ikeys now host a home semi final next week against Shimlas – a repeat of 2010. Table topping UJ will host Tuks in a darby clash up north.

The first half ended with Tuks 7-6 up, having scored the only try of the match up till then by Andries Coetzee, but the home side were forced into making 57 tackles – compared to UCT’s 16 tackles – in those first forty minutes.

Tuks also conceded nine penalties in the first half, compared to UCT’s three, but the home side made the perfect start to the second forty minutes when winger Hayden Groepes crashed over in the left-hand corner to extend his side’s lead.

Flyhalf and captain Wesley Dunlop missed the conversion, but with Tuks leading by 12-6 it seemed as if they would keep their noses in front throughout; despite the Ikeys’ brave effort up till then.

But UCT wasted no time in chipping away at that scoreline when flyhalf Demetri Catrakilis – who probably did not enjoy his best match of the 2011 Varsity Cup – popped over his third penalty to make it 9-12 after 45 minutes.

From then on, however, the second half began to belong to Tuks who piled on the pressure on UCT.

To their credit, the Ikeys resisted but the dam-wall eventually burst in the 60th minute when former Maties centre Dabeon Draghoender crashed over for his first try this season. Dunlop missed the conversion but at 17-9 up Tuks suddenly had one foot in the semifinals.

UCT, however, struck back almost immediately when Catrakilis chipped over his fourth penalty in the 63rd minute, with Tuks continuing to concede penalties at the breakdown, before Whitehead made the game-changing break three minutes later.

Whitehead ran a superb angle off his flyhalf before off-loading a speculative pass to a flying Marcel Brache who needed no second invitation to the tryline. Brache, who made his name in last year’s Varsity Cup, touched down near the posts for his team’s first try and levelled the scores at 17-17.

Catrakilis stepped up and slotted the fairly easy conversion and, suddenly, UCT found themselves ahead for the first time since the fourth minute of the game when the selfsame Catrakilis had slotted an early penalty.

With just over 13 minutes remaining the game was by no means UCT’s and they were forced to hold on in the face of more Tuks pressure; the home crowd also cranking up the volume as they got behind their team.

A 74th minute penalty gave Tuks the chance to steal the lead one last time, but captain Dunlop missed his penalty attempt from far out before UCT claimed a crucial penalty in their own after a knock-on had given Tuks an attacking scrum.

UCT surged up-field and won another penalty in the 78th minute which they opted to kick to touch – despite the kick being in Catrakilis’s range.

The UCT line-out, as it did for most of the night, coughed up the ball giving Tuks one final chance to counter-attack. They went wide quickly, with outside centre Jean du Plessis doing well to find space, but winger Groepes knocked on and it handed the visitors one final scrum.

Scrappy No.9 Nic Groom, a late inclusion in the UCT line-up, fed the ball and booted it into touch.

That brought about the final whistle and secured the Ikeys’ place in the Last Four yet again.

The other results of the night saw UJ beat Maties which means the three times champions will not feature in the semi finals. Shimlas narrowly beat NMMU and sneaked into third spot while Tuks with the bonus point hung in at fourth spot.