Ikeys back in action! 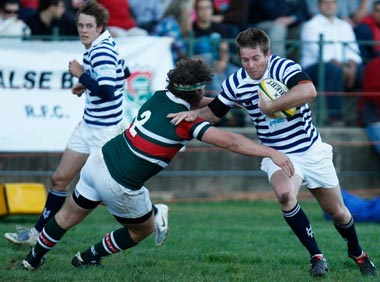 Ikeys back in action

On Saturday, The FNB Ikey Tigers return to action as they make the short trip to Constantia to take on False Bay, the defending WP Super League A champions. As is tradition, the two teams will also be playing for the Mark Jordaan trophy, which is also currently held by False Bay.

After an improved FNB Varsity Cup campaign this time around, a changed FNB Ikey Tigers side is ready to hit the ground running in their domestic campaign. “We’ve lost quite a few players to the Baby Boks and Province teams, so we’re hoping that our guys can pick up where they left off in the Varsity Cup,” said coach Christiaan Esterhuizen.

Amongst those players are Lee-Marvin Mazibuko and Nama Xaba, both of whom have been included in the Baby Boks fifty-man training squad.

“There won’t be any first caps in the side, but we’ll be including players who weren’t eligible to play in the Varsity Cup,” Esterhuizen added.

After their brief hiatus, the boys in stripes have their work cut out for them as they look to get off to a winning start. However, if they play with the inspired form we saw glimpses of in this year’s Varsity Cup, the result could very well go their way.

“False Bay are the defending league champions, and they’re a hugely experienced side, so we’re definitely going into this as the underdogs. But all it means is that we have a chance to prove ourselves, so hopefully we can use the intensity and experience of the Varsity Cup and pick up where we left off,” concluded coach Esterhuizen.

The match between the FNB Ikey Tigers and False Bay RFC is set to kick off at 16:00 on Saturday, the 22nd of April at Philip Herbstein (Field A). The u20 A side will also be in action, kicking off their match at 12:15.