Blog - Latest News
You are here: Home / Newsflash / Ikey Tigers with too much bite for Hammies 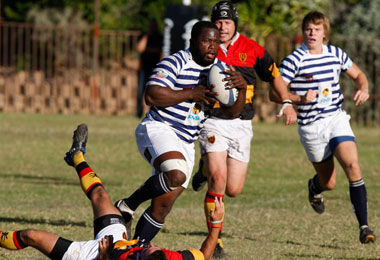 Ikeys Hooker Hanyani Shimange runs over a would be defender (Photo: Peter van As)
It was a great day for rugby at Gardens Tech – Hamiltons alternative home venue and one of the most beautifully located fields in the country – and UCT did not disappoint, when they fronted up and smashed the big Hammies team backwards time and again to claim a solid victory beating the 2009 league and National Club Champions 21:12.

The Ikey Tigers team had been bolstered by the return of a number of WP players and the added experience and bulk did not fail to make an impact against the vaunted team from Green Point who had just smashed rivals Maties 44:30 the week before.

UCT coach John Dobson was happy to admit after the game that “This was definitely one of my better varsity rugby days -  a good win against very good opponents.”

The Ikeys started with a bang, when center Sean van Tonder regathered a perfectly weighted up and under by Matt Rosslee and managed a spectacular pass to his center partner Mark Esterhuisen who beat a defender and raced away for a try in the third minute.

The students, playing with the wind, racked up an 18-0 half-time lead and never looked back – despite playing into the wind in a physical second half which saw two of their players sin binned.

“Playing with 14 men for 60 minutes against a quality side like Hamilton’s is not the best idea, but the guys kept their composure in key stages and I actually thought we left a few points out there in the end.”

The always impressive Marcel Brache, playing on the wing this week, nervelessly ‘chipped’ over a long-range penalty for an 8-0 lead, before he scored a well-taken try when Hamilton’s failed to control a Nic Groom box kick, Rosslee adding the extras.

A Rosslee penalty before half-time made it 18-0 and the visitors could easily have made it 23-0 soon after the break, only for replacement lock Don Armand to knock on over the goalline after some good work from speedster Marcello Sampson.

Hammies did score two second-half tries, one off a line-out maul and one after some individual brilliance by winger Terry Jacobs in the last minute, but a second Rosslee penalty goal – in between their two scores – kept UCT out of range for an important and well-deserved victory, their forwards laying the foundation in between some heavy exchanges up front – but the likes of Ash Wells, Hanyani Shimange, Martin Muller and Jody Burch (all back from Vodacom Cup duty) clearly relished the opportunity to front up against Hammies.

UCT was most impressive at scrum time, earning themselves a tighthead, two penalties and a freekick in the first half, so the Man of the Match award went to burly tighthead prop Grant Kemp who put in the hard work up front.

UCT remain the only unbeaten side in the Super League this season and next weekend’s Intervarsity clash against Stellenbosch could well decide which team represents Western Province at the National Club Championships later this year.

All photo of the match here – courtesy of Peter van As: