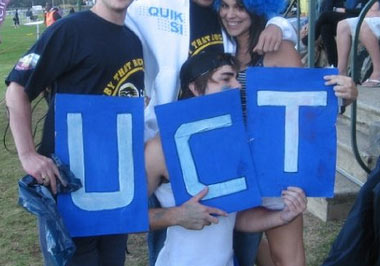 This evening, the Ikey Tigers come up against CUT on the Green Mile, in Round Four of the Varsity Cup.

The game will be their third, and second successive, home game of the season, before they head out on the road again.

With CUT having yet to bring in a win so far in the tournament, Ikey’s coach Kevin Musikanth is confident that the visitors will be rearing to go: “CUT haven't managed a win yet so we know that they will be coming all out for us on Monday so we need to be prepared for that challenge,” he said.

The Tigers, on the other hand, are coming off a 40-13 win against the Madibaz in Round Three – momentum which they will be looking to carry forward into next week. What’s more, due to the fact that they will be playing at home again, their prospects look good.

“We had huge support in our first two home games and the boys are chomping at the bit to get back onto the field for the match against CUT, in front of our passionate students kitted out in blue and white,” said the coach.

Speaking to their prep for the game, Musikanth explained “We are trying to build on our performance and improve every week. Prep is going well, and we as a squad are in a good space at the moment.”

“Most of our players are back, which after a win like Monday, makes selection quite tough.”

Windy Win for the Ikey Tigers