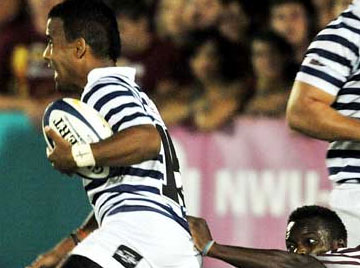 Try scorer Therlow Pietersen – back to his lethal best.
The Ikeys Tigers showed the value of clinical finishing when they recorded a convincing 36-8 victory over FNB Pukke in Potchefstroom on Monday night – that after trailing by 0-8 early in the match.

UCT were overwhelmed for five minutes when Pukke came out the tunnel more awake, then the Tigers rampaged but went dormant for the last 33 minutes, once they had got their bonus point.

It was UCT’s second successive away match and at altitude and their second big win which sees them topping the log for the week. They beat Shimlas 26-10 in Bloemfontein last Monday and then stretched that sort of victory in impressive style. When they turned it on, they were magnificent.

There was a huge crowd at the stadium with female students galore, delightfully and substantially outnumbering the males. There were pipers to play, soldiers to do smart thing, a cannon to signal the kick-off, motorcycles, small children with red balloons, flags, a marimba band, some public smooching for Valentine’s Day. Pukke put themselves out.

They also put themselves out at the start of the match as they roared at the hesitant Ikeys. Inside the first minute the Ikeys were ahead of the kicker, did not stop when the referee told them to stop and were penalised. Scrumhalf Johann Laker goaled. 3-0 in a minute.

Then inside his own half, big, athletic flyhalf Johnny Welthagen burst between two forwards on his own 10-metre line, sped down the field and gave to George Tossel who passed the ball to Willem Barnard, grandson of a Springbok of the same name, and Barnard raced over in the corner. 8-0 after five minutes.

In the next 75 minutes Pukke did not score a point.

The Ikeys grew in confidence and soon dominated the game. They were unimpressed by big men charging, outscrummed their big opponents, won numerous turnovers and gave lessons in passing that was elegant at times, sleight of hand at others.

It started when Tiger Bax broke from his own 22 and gave to Therlow Pietersen who gave back to Bax. Ikeys would surely have scored had Paul Cohen not juggled. It was as if, in that brilliant moment, the Ikeys had slain the Pukke monster and went about winning in the most entertaining way.

Pietersen broke clean through in his own half. He was stopped in the Pukke 22 and the ball went left where Adrian Kritzinger hurried the ball along to Bax in a perfect pass. 8-5. Kritzinger was hurt in the pass by a spiteful late tackle but it did not stop him doing it again. It was his brave pass five minutes later that sent Pietersen in for a try which Demetri Catrakilis converted from far out and UCT led 12-8 after 31 minutes. 16 minutes later they had their bonus point.

Just before half-time flank Nizaam Carr stepped and ran 40 metres to score at the posts, stepping defenders in the best Danie Gerber fashion as UCT led 19-8.

By now the Pukke were in disarray, the Ikeys doing everything with enthusiasm. They could have scored right at the start of the second half but knocked on instead.

Carr won a turnover on the halfway line and the Ikeys went left for Cohen to race over in the left corner; that made it 24-8 and gave them a bonus point for four tries.

They should have scored soon afterwards but Ricky Rijs – a replacement for Pete Haw this week – knocked on with the goalline begging for his visit. But the Ikeys now seemed no longer to want to score tries. Their next four scores were penalty gaols by Catrakilis, the last when time was already up at the end of the match.

Afterwards Carr was named the Player that Rocks, a.k.a. the Man of the Match. He was given several gifts and will wear pink shorts in the next match. There were several other Ikeys who were exceptional – Bax, Kritzinger, Catrakilis, Nick Fenton-Wells, Eben Etzebeth and the rest.