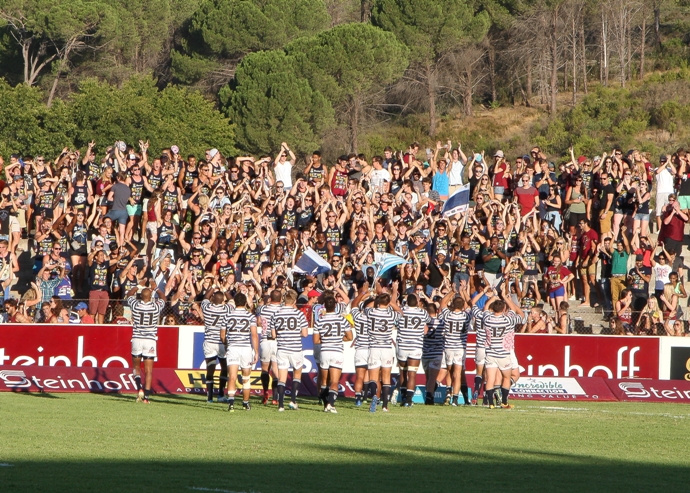 Ikey Tigers’ 2016 Varsity Cup Campaign gets underway on Monday 8th February against 2015’s champions, UFS Shimlas! The team has been preparing hard and we can’t wait to see our beloved blue and white running rugby back on the Green Mile.

All Ikey Tigers supporters are warmly invited to join us on the Green Mile for the opening match of Varsity Cup 2016.

Tank Lanning (‘90-‘95) and others have been dreaming up how our Ikey Tigers’ supporter experience can keep improving (installing The Ikey pub in 2015 was a pretty neat upgrade!) For starters we will have a demarcated and branded section in the stand next to the highway with its own security. Entry will be free (upon RSVP) and cold beers and droëwors will be on hand. Space is limited so please get your RSVP through to Kevin Forte (kevin.forte@ikeytigers.com).

Join us for the first match of the Ikey Tigers 2016 season!

Where: The Green Mile

For the expanded Match Schedule including the Young Guns and Koshuis competitions click here.

More news from the organisers of the Varsity Cup: 2016 rule changes and more

The FNB Varsity Cup is in its ninth year after a highly successful inaugural competition in 2008. It is already a highlight on the rugby-mad South African’s sporting calendar. This inter-university rugby competition sees eight of the country’s top universities go head-to-head to take home the title (and a substantial cash reward). In a rugby nation impassioned about witnessing an exciting brand of attacking rugby, Varsity Cup has been at the forefront of driving just that.

Also serving as a starting block for young players to launch their professional rugby careers, a glance to the highest level in world rugby will provide assurance that this success has been certified in Green and Gold. At this year’s 2015 Rugby World Cup 23% of the Springbok squad had emerged through the Varsity Cup competition.

The competition strives to constantly improve the game, enabling it to be more attractive to the general public, and 2016 will be no different. By cleaning up areas that can be frustrating to both players and spectators, Varsity Cup aims to create a more enjoyable game for players and more entertaining experience for supporters.

Varsity Cup strives to maintain the strengths of SA Rugby, such as scrums and mauls – areas in which they are world-renowned for their ability. Which is why they work in conjunction with SARU, who give their full support in the two exciting rule changes to the scrums and mauls in 2016.

“We’re in a very privileged position where we can experiment with various laws or law applications in a high quality, ultra-competitive competition like the Varsity Cup,” said Rassie Erasmus, General Manager of SARU’s Rugby Department.

“The scrums and mauls have been topics of debate in recent years and we are excited to be at the forefront when it comes to experimental changes and applications to these areas of the game thanks to the Varsity Cup and their organisers.  It gives us a great insight into how players, and more importantly referees adapt in pressure situations.

“Thanks to the high profile and quality of the Varsity Cup, we also know that the world’s eyes will be fixed on the outcomes of these trials which is something of which we can be very proud.”

In a slight change to the maul, the essence of the maul will remain the same, however there will be adjustments to the law to ensure that should the maul go static, move sideways, or in any direction other than forwards, the referee will issue a call for the maul to move forwards.

This change is meant to provide consistency and clarity around the maul and to aid referees in enforcing the law.  Another major focus will be to reduce the number of reset scrums and to ensure the safety of players in the scrums. Fans can expect to hear a slightly different call from the referee in 2016, as the scrum sequence will now be: crouch, bind, slide. Following the initial crouch, props will bind onto each other, without being allowed to bind onto any armpit or below the middle of the rib area. Once the props have a solid grip, the referee will decide that their bind positions have been established and they will not be allowed to change or adjust those. Props will also have to line up ear to ear and not be allowed to line up head to head. Finally, the slide call will replace set, which will ensure that there will be no impact between the front rows. Once the referee has decided that the scrum is stable, he will instruct the scrumhalf to feed the ball into the scrum as per the current law.

Varsity Cup CEO, Duitser Bosman, believes that these two changes have been implemented in an attempt to build upon an already strong area of the game, while providing continuity during matches."By having less scrums falling with more effective mauling, Varsity Cup will add a lot to the spectacle of rugby without taking away a two dominant aspects of South African Rugby,” says Bosman. “We believe the spectators will enjoy this."

In addition to the rule changes, spectators can expect the White Card review system, which was reintroduced in 2015, to be dropped until the semi-final and final of the competition. All the other aspects of Varsity Cup that make the competition unique will return in 2016 – the most important of those undeniably the fanatical supporters.