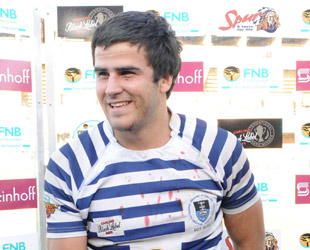 Odendaal, in his fourth year of Varsity Cup rugby, is one of the most experienced members of the Ikey Tigers squad and coach Kevin Foote had no hesitation in handing the captaincy to the former Marlow Agricultural High School scholar.

The 24-year-old will take over the captaincy from flanker Ntsolo Setlaba, who will be free to concentrate on his own performances in 2013.

Foote explained: “Levi has been around for a long, long time and is a stalwart of this UCT side, having played for us since 2010. He also captained the team in the league and he commands respect from everyone – he’s a guy that everyone looks up to.

“At the same time, we thought it would be good to free Ntsolo of the pressures of captaincy and we’re excited to see how he goes in 2013.”

Odendaal’s deputy will be scrumhalf Liam Slatem and Foote added: “Liam had a tough 2012 season, after recovering from a pre-season ankle injury and we’re expecting a big 2013 from him.

“He’s experienced and hungry to do well, so we’re happy with our leadership team.”

The likes of Setlaba and Josh Katzen (last year’s UCT Young Guns captain) are all expected to provide back-up to Odendaal and Slatem this season as Foote continues to rebuild his team after losing a host of big-name players after their 2011 Cup-winning season.

Aside from losing the ever-present Wes Chetty (prop), Currie Cup winners Don Armand (lock/flank) and Damian de Allende (centre) are no longer available due to Super Rugby call-ups and inside centre Adrian Kritzinger has hung up his boots.

There are a number of promising new faces in the UCT group, however; WP U19 back Kyle Lombard and Robbie Louw (the son of former Springbok flanker Rob Louw) to name just two out wide. Up front, the Ikeys have been boosted by the arrival of props Ollie Kebble (SA Under-20 in 2012) and Sti Sithole (who was recently named in the 2013 SA U20 squad) and American hooker Derek Asbun.

“I’m really excited about the players I have at my disposal this season,” said the Ikeys mentor.

“Competition for places is tough and that’s what we, as coaches, want.”

The Ikeys will kick-off their 2013 campaign against the FNB NMMU Madibaz in Cape Town on Monday, February 4.