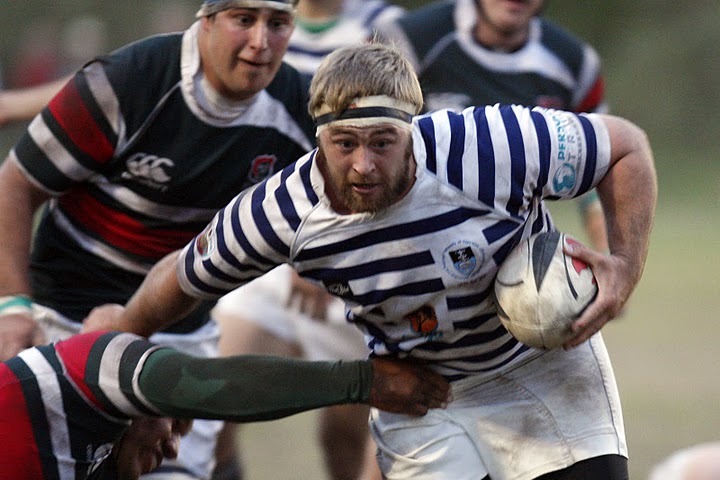 Back in the no2 jersey – UCT’s hard man Dayne ‘Danger’ Jans
After going into a solid lead at half time, UCT had to see off a False Bay rally which saw the visitors draw level in the second half and ended up pulling away for a 27:17 bonus point win.

The students played against the stiff and cold breeze in the first half and did well to hold onto the ball for extended periods stretching the visitors defense. A tactic that paid off as early as the fifth minute, when Vice Captain Therlow Pietersen dotted down in the corner.

Pietersen was playing in the unfamiliar inside center position, with Marcel Brache away on WP duty – this had opened up an opportunity for the young  David Ambunya to get a first taste of SLA rugby for the Ikeys.

Next it was winger Richard Steward who dotted down and then UCT’s captain Don Armand who, in familiar fashion lead from the front and smashed his way over the line to make it three tries for the home side.

False Bay certainly tried and had their chances in the UCT 22, with  the wind helping them to get some territorial advantages, but the Tigers resolutely defended and kept the men in green and red out of their in goal.

False Bay, did get on the scoreboard showing quick hands off a lineout when hooker Hugo Lamprecht barged over. Former provincial Flyhalf Pieter Benade got the conversion – 17:7 at the halfway mark.

The second half UCT had the wind in their backs and may have relied just a little bit too much on the territorial relief it promised, cause it was the visitors who faught back and took control of possession. Now UCT were forced to make the tackles and False Bay scored twice to draw level at 17:17.

In the end it was the home side who had too much fire power and added a bonus point try and some extras – all courtesy of Nick Holton – for a 27:17 scoreline – their 11th consecutive win.

UCT’s third team, the Ish Dramat XV had a bit of an off day, going down 5:38, showing some tactical immaturities and the Eagles, UCT’s seconds, faught hard, but in the end had to accept a narrow 11:17 defeat.

The UCT U20A1s celebrated a special 15:11 victory agains the touring Italy A19 Academy side.

See all club results below.

SEMI FINALS FIXTURES FOR SECTION B