Blog - Latest News
You are here: Home / Newsflash / Ikey Tigers kick off with a win 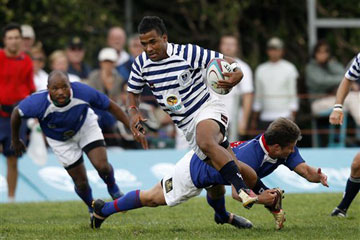 University of Cape Town beat the Shimlas 26-10 at Shimla Park in Bloemfontein, and deserved an even bigger win as they dominated all aspects of play.

The Shimlas were surprisingly sloppy while the Ikeys used every opportunity to run with the ball and did it best when they came bursting down the middle of the field.

It was a match with moments but too many handling errors for much continuity. Add to that sloppy line-out work and it was often an untidy match.

In the first half the Shimlas attacked the tackle area to great effect as the Ikeys stood off and watched. Come the second half, the Ikeys got stuck in with a will and apart from their iffish try the Shimlas did not come close to scoring.

In the first half, too, the Ikeys were guilty of some silly kicking, but that, too, was tightened up during the break.

In the first half ex-Matie Charl Weideman had an exciting run down the right only for an inside pass to go awry.

There was just one try in the first half, but it was a jewel. Throughout the game, the Ikeys found paths through the heart of the Shimlas who seemed to be expecting them to play wide. The try came in that way. Just over the halfway line, neat flyhalf Demetri Catrakilis turned a pass smartly inside to eager Marcel Brache and the tall centre raced through before giving to flank Don Armand who raced over to score near the posts. Catrakilis, the most economical of kickers, converted. 7-0 after 19 minutes.

The Shimlas had a good moment in the half when they went left and tall wing Jamba Ulengo took a sharp, little pass from Francois du Toit and cut clean through, but it all fizzled out and the Shimlas had to settle for a penalty by Du Toit to make the score at half-time 7-3.

The penalty count was strange. There were just four penalties in the half, all in favour of the Shimlas who went spotless through the half. The second half was different as the Ikeys had four penalties before the Shimlas got one.

When Greg Mallett charged off the back of the scrum and then Etzebeth rumbled on, the Ikeys were close but they lost the ball.

Then the boot of Catrakilis went to work – a long, angled kick made it 10-3 and then an easy one made it 13-3 after there had been confusion amongst the Shimla backs and vice-captain Adrian Kritzinger latched onto the ball.

Just after the strategic break, with the pink ball that was on for three minutes after each such break, Catrakilis kicked a magnificent penalty form a long way out and just in from touch. 16-3 with 19 minutes to play.

Then the Tigers squandered a golden opportunity. With three metres to go to the line and with a two-man overlap they became complacent and contrived to pass the ball into touch. But they got a try soon after.

The Ikeys threw into a line-out but the Shimlas smacked it back to their side, causing jitters at the back and the next thing the Ikey horde was on their line. Nic Groom got the ball back and Catrakilis gave a perfect pass to fellow debutante Sabelo Siyakatshana cut clean through for a try under the posts. Catrakilis converted. 23-3 with 10 minutes to play.

The Shimlas managed to shrug aside the tackles and went through many phases without making much headway till captain Willie Britz ploughed ahead and got a pass of sorts to unmarked Hanno Pieterse who ran 22 metres or so to score. There were strong suspicions, based on good evidence, that the pass was forward, but George Whitehead converted. 23-10 with six minutes to play.

Shimlas went off-side on full-time and Catrakilis made the final score 26-10 on a warm evening on the Highveld when the coastal Ikeys seemed fitter and stronger.

There were some fine individual performances.

Scrumhalf Nic Groom, had an excellent match. The Ikey centre pair was most impressive – ever-threatening Marcel Brache and skilled, clever Adrian Kritzinger.  Nick Fenton-Wells, were industrious and effective and amongst the tight forwards strong lock Eben Etzebeth was outstanding.