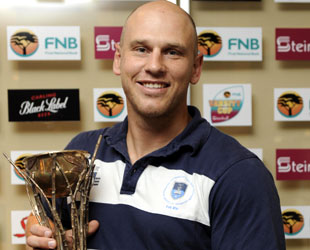 The FNB Ikey Tigers are spending the week in Plettenberg Bay as they ramp up preparations for the 2013 FNB Varsity Cup presented by Steinhoff International.

The 2011 champions had a very disappointing 2012 campaign, which saw them forced to play in the end-of-season promotion/relegation game against FNB CUT but coach Kevin Foote is confident ahead of this year.

“We thought we’d change things up a bit and head off to Plett,” said Foote.

“In the past we did a weekend in Ceres in November and then spent a week at the RPC in Riebeek West in January as part of our preparation.

“Now, we’re in Plett training at the Plett Rugby Club. We phoned them up and asked if we could make use of their facilities. In return we will be doing some coaching clinics and also be donating some kit to those in need.”

According to Foote the players will do some “fun activities” during the week, as well as rugby-specific training and a few sessions with mental coach Tom Dawson-Squibb.

“We want to make it as fun as possible for the guys, but, of course, we will focus heavily on rugby.

“All the coaches have been working hard, Paul (Day), Shimmie (Hanyani Shimange), JJ (Gagiano), Mike (van Rheede), not to mention conditioning coach Tiaan (Campher), and everyone will have a chance to work with the players during the camp.

“I was happy with how the guys came back from their holidays,” added Foote, the players having done fitness testing a few days before they left for camp on Sunday. “They all tested well and the guys are fit and strong ahead of the season.”

There are a few niggles in the current squad – most notably flanker Ntsolo Setlaba (hamstring) and fullback Dillyn Leyds (broken hand) – but there is no sign of panic from UCT’s head coach ahead of the first week of Varsity Cup action on February 4 (with the Ikeys going up against FNB NMMU).

FNB UCT will wrap up the week’s training with a friendly against the SWD Eagles on Saturday, January 19, before heading back to Cape Town the following day.

Eben Etzebeth on the wing?