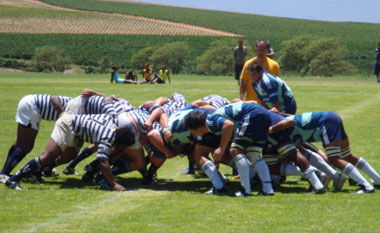 Rematch – UCT vs Stormers 2009, in the picturesque Riebeek valley
While 13 Universities prepare for the upcoming Varsity Cup and inaugural Varsity Shield Tournaments, the UCT Ikey Tigers once again have the privilege of facing the Stormers in what has become a regular fixture at Alan Zondagh’s Rugby Performance Centre in Ribeek-Wes.

The FNB Ikeys will face the Stormers – who are newly sponsored by DHL, on Saturday 15th Jan 2011. This fixture is again a great opportunity for both sides to prepare for their respective tournaments. This year the clash has some extra spice, as it boasts no less than eight Ikey Tigers involved in the WP / Stormers set-up.

The 2011 Varsity Cup squad assembled soon after the end of the 2010 league campaign. The squad has gone through a great deal of preparation, explains captain Nick Fenton- Wells. “Although the squad is young, sprinkled with a fair share of older faces – veterans Wesley Chetty and Pete Haw both part of the 2008 squad, it is no doubt one of the stronger squads UCT has produced since the beginning of the Varsity Cup competition in 2008”.

The squad has been fortunate enough to use the facilities at Bishops where they used the 1st XV field, field weight and change rooms. Nick continues to explain that “During the first half of pre-season, the Ikey Tigers team building and preparation included a trip by train to Kalk Bay, a weekend away to the MacDonald’s farm in Ceres, more than a few “Strong-man” sessions and plenty more on field sessions”.

For many in the squad it will be their first time facing opponents of this caliber. However, if last year’s score, where UCT went down 21-3 is anything to go by, then spectators are definitely in for a cracker. After the RPC camp the squad is set to play the University of Western Cape, who will feature in the Varsity Shield and A Western Province XV. These three  games will definitely have coach Kevin Foote’s team ready for their first Varsity Cup clash of 2011, when they face the Shimlas out in Bloemfontein on the 7th of February.

Make your way out to Riebeek on Saturday the 15th for a day trip with an unique Ikeys rugby flavour and lets all get behind the boys as they shape up for what is set to be another spectacular season of running rugby on the GREEN MILE!!!A U A U AUCT!!!!!!