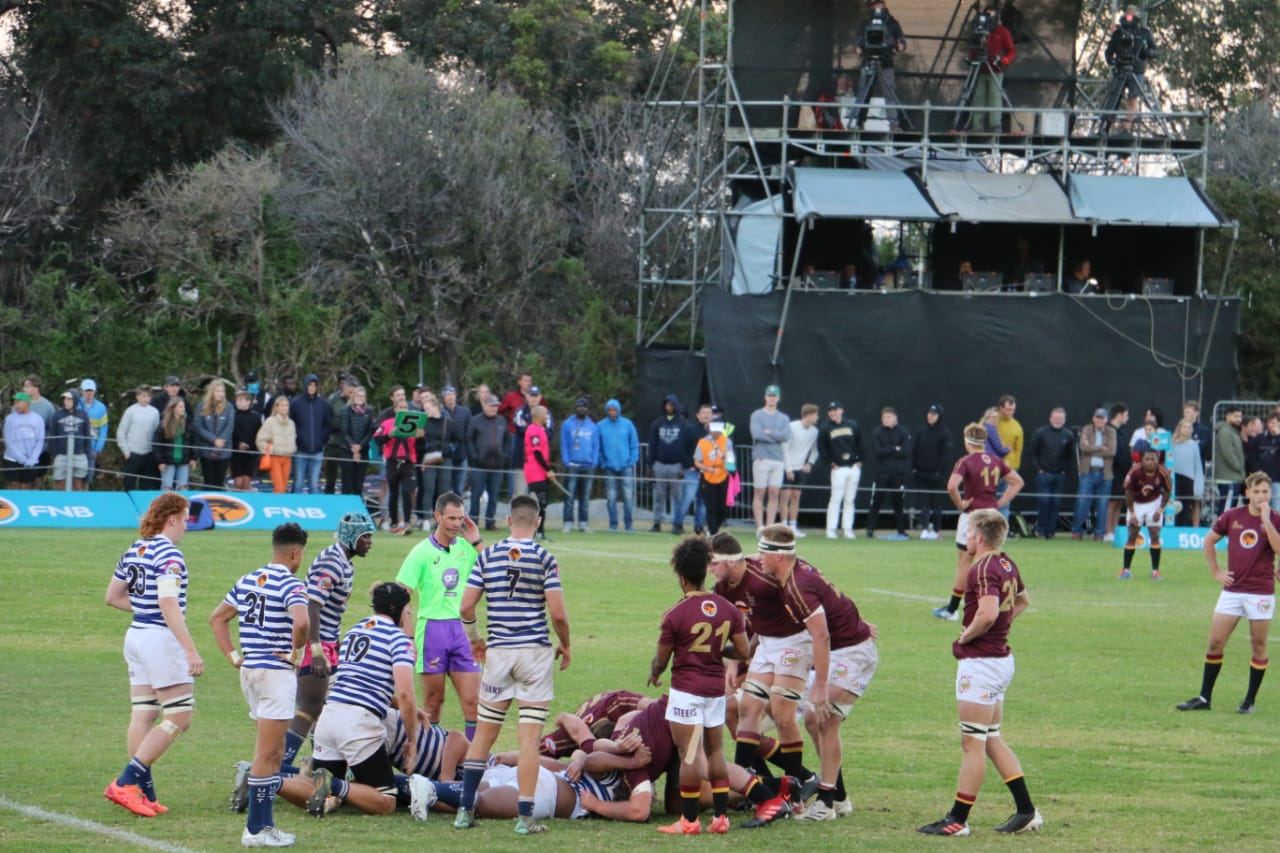 Top seed Shimlas and Ikeys saw their final hopes dashed when Maties and Tuks won their semi-finals to see the Stellenbosch side host Tuks in the FNB Varsity Cup final at the Danie Craven Stadium on Monday, 25 April.
On the Green Mile, Maties hooker Sean Swart scored a hat-trick of tries via the omnipresent maul as FNB Maties put pay to the Ikeys via a convincing 58-19 win. In doing so, Swart equaled the record for the most tries in a season (12).
The Ikey Tigers were regarded by many as favourites, having beaten their arch-rivals 44-27 in the round 7 clash at the Green Mile, but their discipline let them down (conceding 18 penalties), they lost the battle up front, and had just 38% of the possession. UCT were also reduced to 14 men after just 12 seconds of the match when inside centre Rethabile Louw cause a big disruption to his team when he was yellow carded for taking out a player in the air at the kick-off.
The visitors made their numerical advantage count with a fifth-minute point-of origin try. Wing Anton du Toit burst down the left touchline, handed off Suleiman Hartzenberg and found scrumhalf Thomas Bursey, who’s inside pass put captain Gift Dlamini away.
Captain Luthando Woji dotted down next to the posts, but Maties regained the initiative when Swart scored from a driving maul and fullback Sibabalwe Xamlashe dived over for a point-of-orgin try. Fleurs slotted both conversions and a penalty to give the visitors a commanding 31-7 lead at half-time.
Ikeys No 8 Taariq Kruger paid the price for repeated infringements by his team when he was yellow-carded early in the second half. Almost inevitably, Maties kicked for the corner and Swart went over from the resultant driving maul. Ikeys scored while down to 14 men through flank Sipho Dyonase, before Swart completed his hat-trick via another maul.
The visitors lost lock Juan Beukes to the sin bin, but that didn’t prevent them from scoring another two tries to complete the rout. Maties will thus contest their 10th FNB Varsity Cup final next Monday, and will be chasing a record-extending sixth title.
Ikeys 19 (7) – Tries: Luthando Woji, Sipho Dyonase, Thomas Meyer. Conversions: Duran Koevort (2).
Maties 58 (31) – Tries: Gift Dlamini (1×7), Sean Swart (3), Sibabalwe Xamlashe (1×7), Thomas Bursey, Anton du Toit.
Conversions: Nevaldo Fleurs (5). Penalties: Fleurs (3).
Varsity Cup final: Maties vs Tuks (Monday, 25 April, Danie Craven Stadium, 19:00, SuperSport channel 211)
https://ikeytigers.com/wp-content/uploads/2022/04/202204-ikeys-maties-semifinal.jpeg 853 1280 Ikey Tigers https://ikeytigers.com/wp-content/uploads/2016/06/uct-ikey-tigers-logo-web-blue.png Ikey Tigers2022-04-19 14:45:452022-04-19 14:45:45Ikey Tigers bow out of Varsity Cup
0 replies

Four Ikey Tigers in SA U20 team
Scroll to top