In 137 years of rich, eventful history UCTRFC has had twelve men presiding over its affairs. Being President of the Ikeys is the greatest honour the club can confer on one of its proud members.

Since the early sixties this singular honour has been conferred on five exceptional men who have guided the club through nearly 60 years of eventful and dramatic happenings on and off the field. 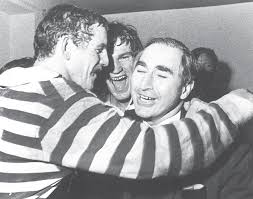 Dugald McDonald has completed arguably the most challenging 15 years any Ikey President has experienced. Following a glittering playing career, from talismanic 8th man at UCT in the seventies, to playing for W.P and the Springboks, Dugald went on to a peripatetic playing career in England, Italy and France.

A man of action is an understatement when talking about Dugald. How many Ikeys have rowed across the Atlantic, walked across the North Pole, and just recently done extensive research into the influence of the Mafia in Sicily?

When Dugald took over the reins in 2004 our rugby club was facing significant challenges, to put it mildly.

Cometh the hour, cometh the man and If ever the saying, ‘To lead people, walk behind them’, as espoused by Lao Tzu, was apposite, the style and modus operandi of Dugald exemplified his tenure. Good leaders attract good followers, and the team who supported Dugald during 15 tough, eventful years was as good as it gets.

One of Dugald’s endearing eccentricities is his habit of memorizing the names of champion Ikey teams. This includes the 2004 UCT Intervarsity victors and other Ikey teams which have won trophies and major clashes, including the victorious 2011, 2014 Ikey Varsity Cup teams and the Ikey team which won the Oxford World University Championship. 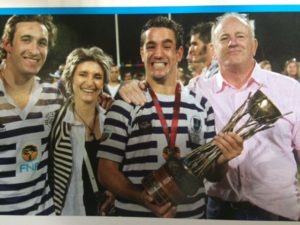 Behind each UCTRFC President is a special wife, and in the case of Marguerite McDonald, we at UCTRFC appreciate the role Marguerite has played. The two McDonald sons, Zandy and Dugald have carried on the proud family tradition with distinction.

We fondly remember how the late Pat Tebutt enthused about being with the squad on Dugald’s farm one year when he provided a very special training and preparation venue for the Ikey squad.

So, we bid adieu to Dugald as President of the club. He has given his all, and we are deeply grateful.

Not many clubs can undergo a transition from one exceptional President to a successor with a pedigree like that of Neville Isdell. Much has been written about Neville’s contribution to the club from his playing days to become a significant benefactor, to being appointed Patron, and now the ultimate honour and responsibility; President elect.

The writer had the privilege and pleasure of being sandwiched between these two men at a recent Ikey game, and one specific thing struck me. They were completely committed to the club in the manner in which they both played the game. Ikey rugby was not just a passion; it was imbedded in their DNA.

We are fortunate to have men like Dugald and Neville choosing to lead by following their best instincts.

We welcome Neville and wish for many years of his inspired leadership.

The FNB Ikeys CPR initiative in support of the Princess Charlene of Monaco Foundation...
Scroll to top