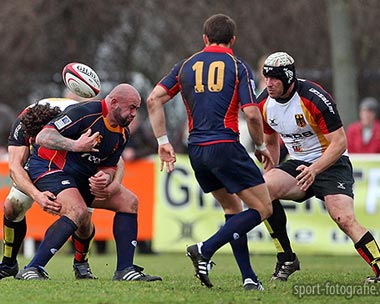 Black, Red and Gold instead of Blue and White – Bodo Sieber, right.
UCT veteran Bodo Sieber featured in Germany’s last match of the 2009/2010 Six Nations B competition, which was also a “final” as Germany faced Spain – their direct competitiors in their battle against relegation.

Sieber or “The Door” as the 2009 1st team captain is better known as, played his 22nd cap for his “Vaterland” in a rainy and cold Heidelberg on Saturday. Germany, who had been promoted to the Six Nations B in 2009 could not secure any wins, but recorded some respectable results, such as a 0:22 against relative giants Romania as well as a 5:34 against Georgia who had given Ireland an almighty scare when they went down narrowly, by 14:11 in the 2007 World Cup.

The German’s direct competitors were Spain, who had also lost all but one match – their opener against Germany which they had won 22:11 in Madrid – so after two long years it came down to the final match, where Sieber’s team was looking to avoid relegation in beating the “Leones”, the Spanish Lions by more than 11 points.

Bodo had missed the recent matches that were played alongside the Six Nations calendar after he became father to a baby boy in early February, but made himself available for the grand finale.

Spain scored early and had more of the game taking a 7:3 lead into the half. When they went over for their second try after a poor German clearance kick to pull away 3:14 early in the second half, the match seemed done and dusted. But the gutsy home side dug deep and pushed over a line-out maul to make it 10:14 and clawed their way back into the game.

With minutes to go the German’s put together some good phases and scored a converted try through hard running Italian Super10 center Clemens von Grumbkow and took the lead 17:14.

The win was within reach, albeit not by the required +11 points, but again it was a poor decision that allowed Spain back into the home side’s 22, where they plucked away until they crossed the line after a pick and drive to clinch the match 17:21.

“It was quite an emotional game, cause our squad is really up against it competing with the other, mostly professional sides in the league. There was a lot of pressure on both teams, in the end, the Spaniards made less mistakes and deserved the win” said the Ikey stalward.

The squad had a week’s preparation with the Union throwing all eggs into the final basket, after the team had to travel to Georgia, Romania and Russia in recent weeks, where defeats were all but inevitable.

Gagiano up for awards that rock