The essential difference is that Ian has done all those things Walter Mitty might have conjured up in his fertile imagination ; and is continuing to do those he chooses to pursue even now, with his customary flair, passion and commitment.

As a young university rugby player Ian started to apply his trademark determination and ability to focus on  a goal when, with the help of a teacher at his high school, he became not just another promising rugby player, but the deadliest goal kicker with the old ‘fat’ heavy rugby ball, in South Africa.

So successful was Ian in his Springbok rugby career that many years later the greatest All Black of the 20th Century, Colin ‘Pinetree’ Meads was heard to growl into his beer; ‘That little bugger beat us on his own! ‘

Ian McCallum played fullback for UCT during the period 1968 to 1973. He represented Western Province and the Springboks (1970 to 1974) and played against the touring 1970 All Blacks and British Lions. Ian is a medical doctor, analytical psychologist, psychiatrist and an adjunct professor in Earth Stewardship Science. He is a specialist wilderness guide, an author and poet as well as a director of the Wilderness Foundation. 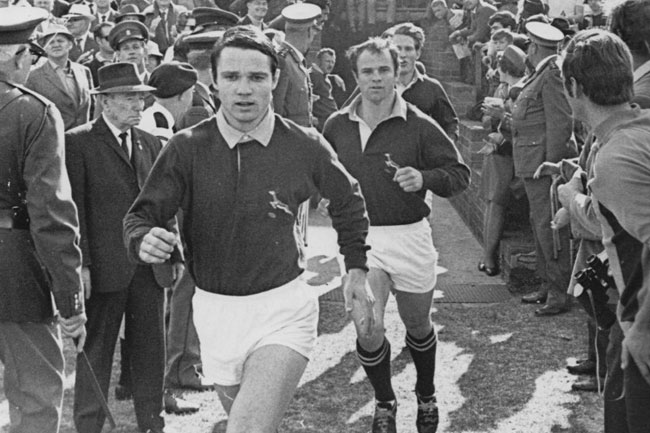 He is the author of two anthologies of wilderness poems: Wild Gifts (1999), Untamed (2012) and a novel Thorns to Kilimanjaro (2000). His award winning book Ecological Intelligence – Rediscovering Ourselves in Nature addresses the interconnectedness of all living things and ultimately, the survival of the human animal. It won the Wild Literary Award at the World Wilderness Congress in Mexico 2009.

He recently completed a four-month expedition following ancient elephant migratory routes across southern Africa. The expedition –Tracks of Giants- began on Namibia’s Skeleton Coast on 1 May 2012 and ended at Cape Vidal on the KZN coastline on 2 September. Together with his long-time friend and journalist Ian Michler, the two adventurers walked, cycled and kayaked the entire 5164 Km journey un-motorised. The expedition focused on two key objectives – the importance of establishing international animal migratory corridors between established national parks in home countries and secondly, to explore the psychological and economic issues associated with the co-existence of human communities and wild animals.

Ian’s other interests include wildlife photography – he won the Agfa Wildlife ‘Man and Nature’ category in 2001, astronomy and sport. His academic interests focus on evolutionary biology, human ecology and the animal-human interface (what we learn about ourselves from the wild). Ian is a trustee of the Cape Leopard Trust. Visit his websites at

Throughout all these milestone achievements, Ian has retained his greatest gift of all. There are numerous ex rugby players who have gone on to great achievements across the spectrum of life, but very few are such gifted story tellers, in spoken word and in print. Ian McCallum has the rare gift of leading one through an adventure, a happening, a dramatic moment, or a funny incident, with quiet humility, wit and wisdom. The world needs story tellers and men of the calibre of Ian McCallum.