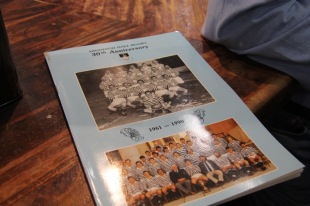 At a gathering in the UCT Club on Friday evening, the 25th March, Hiddingh Hall Rugby finally hung up its boots, but not before filling them up with a typical Hiddingh Hall dose of bonhomie and warm companionship, aided and abetted by a few soothing lemonades.

One of the original founders of HH Rugby back in 1961, Keith Atkinson, was a special guest, and it was time to pay tribute to him for all the years of unstinting service, both on and off the pitch. It is rumoured that some of the young HH players of the late seventies used to refer to Keith as Mr. Atkinson. He was the enduring symbol over a very long period of time, of the best of a true Hiddingh man.

I came across a wonderful Victorian quote by A.G. Hales, the chronicler of the 1906 tour by the First Springboks, which could so easily sum up the rugby philosophy of Hiddingh Hall rugby over 50 years. The quote goes like this:

‘ When something rouses them they can play like Dooley’s dog after a liver and bacon breakfast.’

I have no idea who Dooley was, but his dog definitely would have made the HH team. The standout characteristic of a Hiddingh rugby man was an insatiable appetite for life, and chatting to a number of men who played for Hiddingh over the years, I was struck by two things. One is that their zest for life has not been extinguished by the inexorable ravages of age, and secondly that behind all the fun and laughter, most have added value to their lives, and to the lives of those around them. I had not realized that the wacky shenanigans of youth gave way to well educated, successful men in most cases.

Ian McCullum was the guest speaker, and not surprisingly, Ian gave us all the benefit of his special gift for weaving a tale around rugby as a unique facet of life, a mirror image of all the ups and downs of life, and how young men who gave it their all at Hiddingh went off better prepared for life, not just because they slaved away at the books, but because they learned the invaluable lesson of interdependency and teamwork on the rugby field.

It also struck me that Dugald McDonald, the President of the UCT Rugby Club, is a man who fully appreciates the streak of non conformity which courses through most Hiddingh men. Dugald has done so many adventurous things besides a glittering rugby and business career, that he could easily be an Honorary Hiddingh man.

Jan Palm and the one and only, Denis Cassidy, the life and soul of Hiddingh Hall rugby for about half of its working life, deserve praise for organizing the celebration.

Finally, Hiddingh Hall rugby might be on the shelf of UCT rugby history, but its special contribution to UCT rugby will not be forgotten.

Thanks to Zevenwacht for supporting this event.