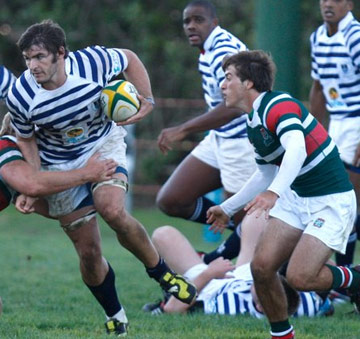 The Ikey Tigers showed their pedigree and determination when they disposed of a fired up Bay side at the latter’s home ground, despite being a man down for most of the game. The Ikeys  came out 20:13 winners in what will be remembered as one of the 2010 classics.

False Bay of course have been the surprise package of 2010, beating both Maties and Hamiltons and were banking on their excellent home record – which saw them unbeaten for two years.

The Ikeys however kicked the match off on a bad note, when undisciplined prop Grant Kemp was red-carded only ten minutes after the kick off.

The students held their nerve and the evenly matched game was decided by none other than one of the Ikeys stars of the season, when  Marcel Brache’s instinct for an intercept try was spot on.

A knee injury to ‘super-sub’ prop Chris Heiberg did not help the Ikeys either, but their gutsy performance would have pleased new head coach Kevin Foote immensely.

The Ikeys beat False Bay 16-15 in their first-round encounter back in April, making them the only side to have beaten the resurgent Bay twice this season.

The coming week for Ish Dramat XV
Scroll to top