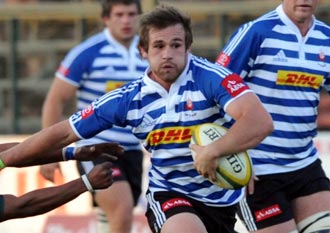 FNB UCT’s Western Province and Stormers scrumhalf Nic Groom believes the new Varsity Cup Young Guns competition will add plenty of depth to the overall competition and, hopefully as a result, the Ikey Tigers too.

Groom was part of the Varsity Cup-winning UCT side earlier this season and his career has gone from strength to strength since becoming a Varsity Cup regular for the Ikeys, much like Kyle Brown (SA Sevens), Tim Whitehead (WP/Stormers) and JJ Gagiano (USA Eagles) before him.
Having made his Varsity Cup debut last year only – that after playing some Steinhoff Koshuisrugby, too – Groom went on to play at Under-21 level for Western Province in 2010, before graduating to the Stormers and WP Currie Cup mix this year.
Groom, however, would loved to have been part of something like the Young Guns competition (an all-student, Under-20s only tournament which starts next year) during his slightly younger days; the former Rondebosch Boys’ High scholar having attended the WP Academy in Stellenbosch during his first year out of school in 2009.
“I think a lot of young players see the Varsity Cup as a way to get noticed,” explained Groom in conversation with varsitycup.co.za, “now, with the Under-20 tournament, they could get noticed even earlier.
“Rugby players seem to be getting younger and younger these days, so the Under-20 tournament is a great way to ‘ease’ the guys into senior rugby after school,” he added.
“At the same time, I have no doubt that the UCT U20s will create a vibe and an ethos similar to what we’ve had during the Varsity Cup. And that, in itself, will benefit the club on a whole.”
And, with UCT’s trophy double in 2011 – which saw them win the Varsity Cup and the Western Province Super League, Groom believes that players should be queuing up to join the University of Cape Town; for rugby and academic reasons.
“The best thing about playing at UCT is that your studies provide such a huge distraction,” said Groom, who also pointed to the Ikeys’ Intervarsity win over the FNB Maties this year as “another achievement in a special, special season”.
“You might think you’ve done quite well in a game of rugby on a Saturday but after training on a Monday spending some time in the library quickly brings you down to earth!
“I’m the type of guy that needs a bit of a distraction away from rugby and my studies provide that for me,” he added.
“And what better place to do that but UCT? I mean where else can you get a world-class education and play rugby with some great players, not to mention great people?
“The big thing about balancing studies and rugby is that it teaches you to balance your time accordingly and keeping to your commitments – both academically and sporting-wise.”
His studies aside, Groom – of course – has nothing but praise for what he has learnt on the field at UCT over the past two years.
“It was amazing to see all the guys from that 1974 team [the last UCT team to win the WP Super League/Grand Challenge] at our annual rugby dinner on Saturday night,” said the quicksilver scrumhalf.
“Hopefully, in 37 years’ time we can all look back at what has been achieved at UCT this season – all with a great bunch of guys.”
https://ikeytigers.com/wp-content/uploads/2011/09/20110928-nic-groom.jpg 233 330 Ikey Tigers https://ikeytigers.com/wp-content/uploads/2016/06/uct-ikey-tigers-logo-web-blue.png Ikey Tigers2011-09-28 10:06:562011-09-28 10:06:56Groom: 'Young Guns will add depth'
0 replies