“He was impossible to miss nor ever forget” Neil Macdonald on Glenn Turner.

It was with great pride that I was able to watch UCT win the inaugural World Universities Rugby Championship in Oxford last year. The team played with much pride and passion throughout the week and deserved their victory against a game, but outclassed Trinity College side from Dublin.

I was also at the post-match dinner where the UCT boys began the celebrations in emphatic style and soon there were jugs of beer and shots being gulped down by every player at the dinner. At the end of the night it hardly mattered which team had won the tournament and each team had its own personalities, leading the team in song and dance and handing out ‘fines’ for increasingly ludicrous and ever more welcome offences.

As I sat nursing my own beer, and praying that I would not be called upon to chug down more beer than I can handle in a month these days, my thoughts wandered back to my own playing days at UCT and to the events and characters which made my time there so memorable. I did not win any world tournaments (the UCT Under 20 B1 side was not invited to many international contests in my day), but I had just as much fun and laughter as I saw on display in Oxford last year. 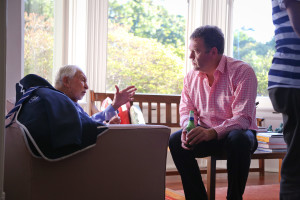 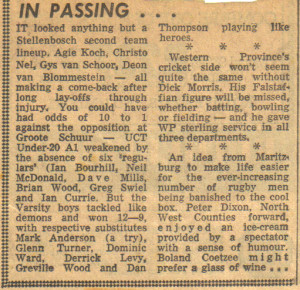 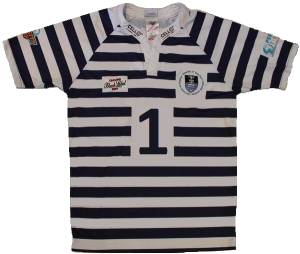 There are some really deserving candidates for this position – mainly because loose head props are only marginally more unhinged than tight head ones. I considered Dave Mills at first for his famous retaliatory kick aimed at his opposing prop in a Stellenbosch Grand Challenge game – which missed the intended target by some distance and neatly neutralised the unsuspecting flanker waiting to participate in the scrum. 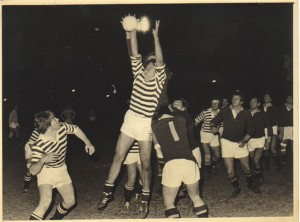 Another tough call as there are as many candidates for this position as there are teams. Alistair Massey must surely rank as the coolest hooking customer for telling Hempies Du Toit to chill out when Hempies had greeted Ali with the taunt of “vars ribbe” when he came on to replace a UCT hooker who had had quite enough of the Stellenbosch iron man. 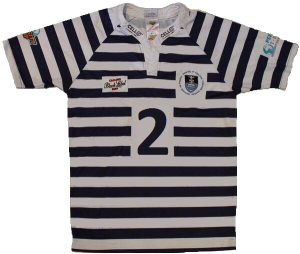 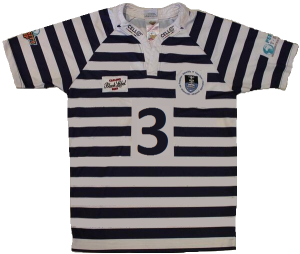 It is difficult to look past Brent Jordaan for this spot – he has all the attributes that make him a shoe in – toughness beyond belief, generally irrational behaviour on the rugby field and a fondness for pain – whether received or inflicted. However, I am going for the UCT Under 20 stalwart Dominic Ward as he had all of these attributes – but possessed the added feature of genuinely believing that he could catch and run with the ball. He could not. 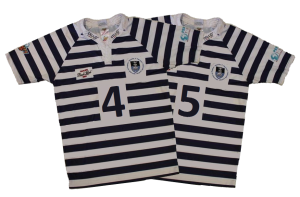 Neil Macdonald never lost a lineout on his own ball but I do not recall him ever winning an opponent’s ball either. He had a scary presence about him (and still does) and all the strength and power to turn that fear into reality but was (and still is) a gentle soul who had the irritating habit of applauding when an opponent did something noteworthy on the field. Andrew Knight on the other hand was fantastic in winning an opponent’s ball but I do not recall him ever winning his own. This made him and Neil a formidable lock pair. I therefore make them joint winners. 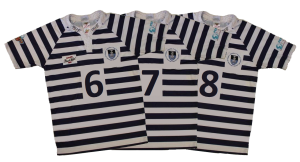 These were the glamour boys of the game in my day. Richard Moir was a formidable flanker whom opponents respected but whose own teammates feared more at the after match sessions – especially if they had made the rookie error of bringing along their girlfriends. Giles White was fantastic as a captain and quite fearless but often appeared fast asleep before (and during) a match and we were certain that it was his girlfriend (now wife) Debbie who wrote his inspiring team talks and worked out the opposition lineout calls. But the winner is Edwin Capendale – who in one season started playing with us in the Under 20 B1 team (having initially been selected in the lesser B2’s) and ended the season in the Western Province Under 20 side as one of its stars. 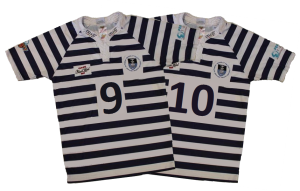 Mark Burton-Moore was way ahead of his time as he had crafted serious biceps at Varsity long before they became a prerequisite for playing rugby. His nickname of “witmuis” was, we thought, because of his blonde hair but we soon discovered that it was due to his high pitched motivational squeak when we were behind our poles after a try had been scored against us (and that was pretty often). I am told that I played with many good fly-halves but because I was usually still scrummaging, never got to see what they actually did. They were a pretty serious bunch too so don’t make the grade for selection in this team. 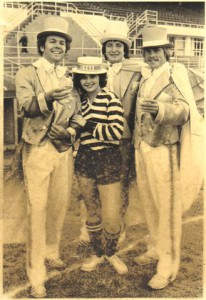 These were the prima donnas of Varsity rugby. If we lost, then it was invariably the fault of the forwards and if we won then this was achieved despite the efforts of the forwards. However, it is difficult to see past Stuart Symmington for this spot. A hugely gifted sportsman who was equally at ease on an athletics track, a cricket field or on the wing, he also did a degree in Latin and ancient Greek – which we believed stood him in good stead when trying to understand what Basil Bey was coaching us to do. His practical jokes were numerous but included over-inflating a match ball so that it exploded at the first kick and squeezing a tube of toothpaste into our lock’s scrum cap before he ran on to Newlands. 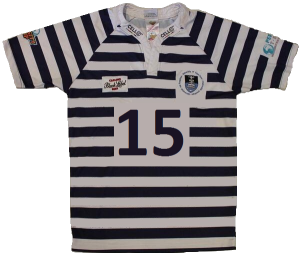 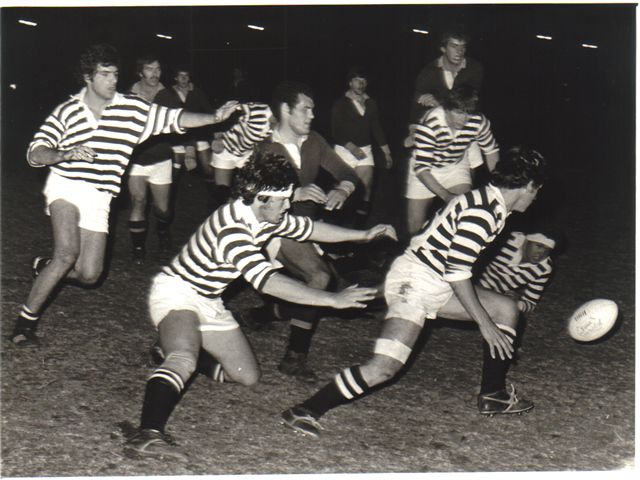 This is not even a contest. Ian Currie or “Muncher” as he was called (for a reason I have never really understood) was the most devastating tackler I have seen on a rugby field. Not for Ian the schoolboy coaching manual advice of placing the head on the upside of the tackle. With Ian there simply was no upside, left or right. It was a full-frontal assault which was employed only once or twice in a match (Sinatra only sang New York once in a concert didn’t he?), but when it happened, both teammates and opponents winced and thanked heaven that they were not Muncher’s victim that day.

And so you see that things don’t really change over the years. Young men become older men and when we do we remember our friendships and teammates with increasing affection. And it seems like only yesterday.

Glenn was the first person I met at UCT. He was impossible to miss nor ever forget. Glenn was the chairman of the house committee and a larger than life presence around our res and indeed most of the University residences at the time . I digress. As a rugby player he picked up the nickname “Theuns” after that lesser known physio of the 80s, one Theuns Stoffberg who also played a bit of rugby. I recall an incident on the now famous rugby tour to Northern KZN in the early 80s when we toured to Matubatuba and other well-known exotic rugby destinations. On the train we stopped at a remote location and a local tannie opened the train door to be met by a rather exuberant Glenn. Upon encountering this large man she immediately exclaimed “oh my God !”. In his inimitable and razor sharp manner for which Glenn is so well known he responded “just call me Glenn“ .

In more recent years Glenn gave one of the finest after dinner speeches ever heard at the annual UCTRFC dinner. He detailed in his very dry laconic delivery the story of the UCT u20b team playing Police 2ndXV away which contained inter alia the Etzebeth brothers (Eben ‘s dad and oom) . Those were the days.

Off the field Glenn made his mark as a memorable cheerleader in the days when intervarsity was a massive highlight for all students; in parallel managing his rugby career playing for Varsity in both the first and seconds and the highly desired 3rdXV. Glenn also managed to entertain the locals playing his guitar with one Dom Ward and signing passionate love songs at various nightspots in Cape Town ……

To top this he graduated as a lawyer from UCT and went onto graduate from Cambridge with a masters in Law from Trinity Hall college. Yet again he managed to perform both on the rugby field and academically; playing a role in the famous Cambridge Blues squad of 1984 which contained a number of internationals. Unfortunately I was on the receiving end of that huge Cambridge victory of 1984 so I remember it too well.

Not surprisingly since his varsity days both at UCT and at Cambridge Glenn has carved out a remarkably successful career; firstly as an advocate at the JHB bar where he was made a Silk and then moving into the business world of De Beers and now Gem Diamonds playing a successful role firstly as legal counsel for De Beers and an executive director of Gem the London listed diamond company.

Most importantly Glenn is a wonderful family man and a great friend to so many people.

He is the perfect example of why we were all so lucky to play for the Ikeys and to build the relationships we had time to cement and enjoy 35 years later.

THE IKEY SPIRIT LIVES ON