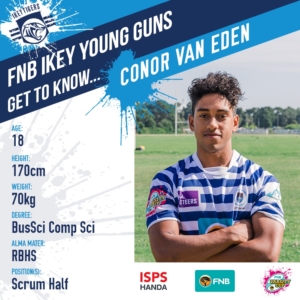 Conor Van Eden, born in 2001, yes are you feeling old yet? One of our new recruits for the Young Guns sits down with our social media intern to discuss his future at UCT rugby and what it means to be an Ikey Tiger!

Van Eden is an old Bosch boy, who speaks about his alma mater with pride. Van Eden started playing rugby at the tender age of seven at Rondebosch Prep School, but only started taking rugby seriously once he was in Grade 11; he laughs, “that’s when I actually realised I had some talent”.

Van Eden explains that the prestige associated with joining the first team created at Bosch made him want it more and work harder to ensure he made the first side. But he assures us that even if he wasn’t at a top-tier rugby school, he would have found his passion and drive to play rugby.

An interesting fact about UCT rugby that people often overlook is the academic standard that all the rugby players have to maintain.

Not only is Van Eden starting his Business Science specialising in Computer Science degree this month, he also played saxophone in high school as well as backs himself to cook up a mean dinner!

The Young Guns have been training since October last year, this coincided with Van Eden’s matric exams, but he assures us that it wasn’t too much of a distraction and just didn’t go to practice if he was writing an exam the next day.

I think we need to keep an eye on this scrumhalf, because if he is anything like his rugby idol, Aaron Smith, he will be the intelligent and mastermind of the game.

Good luck for Varsity Cup Season boys! Be sure to watch the Young Guns at 17:00. The Young Guns will be playing at home, the UCT Green Mile on the following dates:

Come down for a good drink special and some lekker rugby before the first team at 19:00!