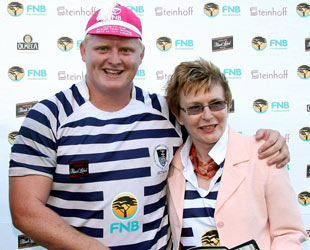 Griquas prop Ashley Wells – a former FNB UCT and Varsity Cup stalwart – is set to join up with English Premiership club Newcastle Falcons in the near future.

According to an article on rugby365.com, the deal is expected to be confirmed in the next week, which would see Wells joining the likes of Mat Turner, Tiger Bax and Joe Pietersen – all Varsity Cup graduates – as overseas-based professionals.

He will also become the umpteenth Varsity Cup player to sign a professional contract – either in SA or abroad – the likes of Juan de Jongh and JJ Gagiano (both of whom have played Test rugby), Kyle Brown, Boom Prinsloo and Bernardo Botha (all SA Sevens players), Wayne Stevens (EP Kings) and Josh Strauss (Lions) – to name a few – having all done exactly that since 2008.

Wells put himself on the South African rugby map with a string of strong performances for the University of Cape Town during the 2010 Varsity Cup competition and has been a regular in Griquas’ Vodacom Cup team this season.

He is expected to fill a gap in the Falcons line-up that will exist during the World Cup due to B&I Lions star Euan Murray’s anticipated Scotland call-up.

Wells – who can play loose- and tighthead prop – also boasts Under-21 and Vodacom Cup experience with Western Province and had a stint with Bay of Plenty in the New Zealand Provincial Championships in 2007.