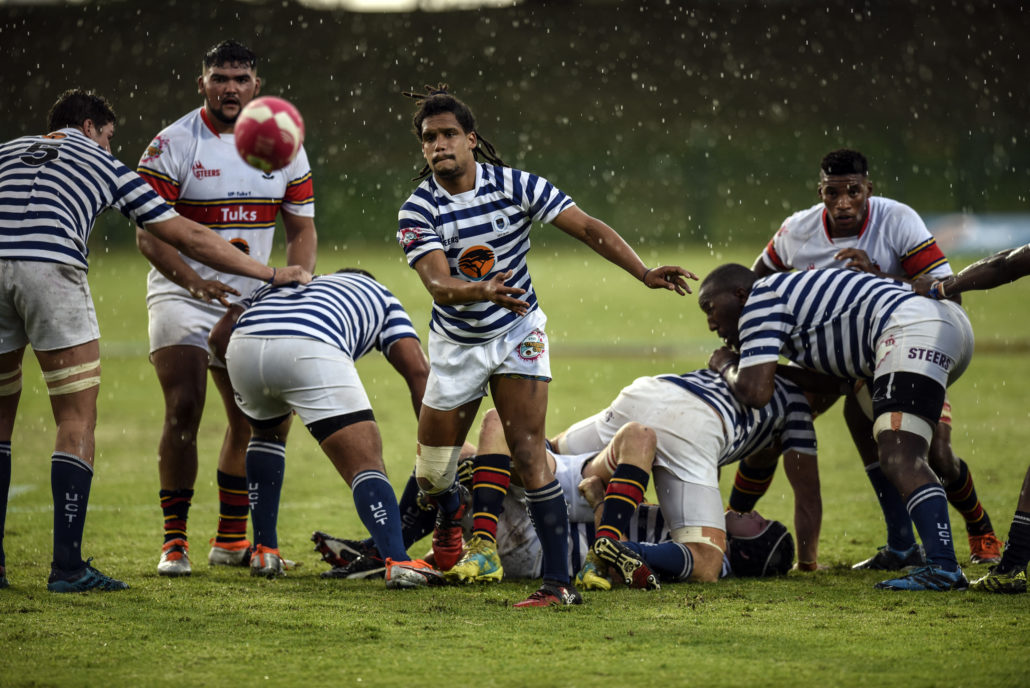 Round eight of the FNB Varsity Cup opened up with one of the most extraordinary games the competition has ever seen. In a match that had it all from cross kicks, yellow cards, beautiful tries and even a lightning delay the Ikey Tigers and UP Tuks played out a 26 all draw.

The Ikey Tigers went into this match desperate for a win and came out the blocks like a team possessed. In the opening phases of the match everything was going their way, as the gifted boot of outside-centre James Tedder found Rayno Mapoe in space and allowed to go over in the corner untouched and open the Ikey Tigers’ account for the night.

Flyhalf Jonty Bredell then produced another moment of brilliance as he charged down an attempted clearance from Tuks centre Erich Cronje and won the foot race over the line to dot the ball down and score UCT’s second try of the match. Bredell converted his own kick which then took the score line out to 0 – 12 for the away side. Bredell and Tedder then each kicked over a penalty to extend the Ikey’s lead to 0 – 18.

It was a dream start for the away side and an absolute nightmare for the home side as the rain made conditions very difficult to get themselves back into the match. Things then went from bad to worse for Tuks as lock Ruan Nortje got a yellow card for a tackle without arms in the 25th minute forcing Tuks to play with 14 men in the closing stages of the half.

The Ikey’s made full use of their advantage as Bredell added another penalty before hooker Cuan Hablutzel charged over the line off of the back of a rolling maul to score his team’s third try of the match and take the score out to 0 – 26.

That’s not where the story ends however, as we all know rugby is a game of two halves and this match proved that more than any other. Tuks made some changes at the break, most notably in the front row as they called on the likes Johan Grobbelaar, their FNB Player That Rocks, from last week.

The home side then produced the form we all knew they had as they looked to achieve the unthinkable and claw themselves back into the match. Denzell Hill, Erich Cronje and Bart le Roux all went over for tries for the side from Pretoria in the second half, le Roux’s try being a seven pointer. Flyhalf Thinus de Beer slotting all the conversions to make it a 3 point game at 23 – 26. In the 78th minute Tuks got a penalty which de Beer kicked over to lock the score at 26 – 26 and that was how the match ended.

UCT put in a valiant effort in the second half but just couldn’t replicate the magic they produced in the first half. The FNB Player That Rocks, Busanda Mabena was a work horse for the Ikey Tigers throughout the match.

The Ikey Tigers walked away with two points and their playoff dreams hanging on by a thread but they can be proud to have been a part of one of the greatest games in the competition’s history.