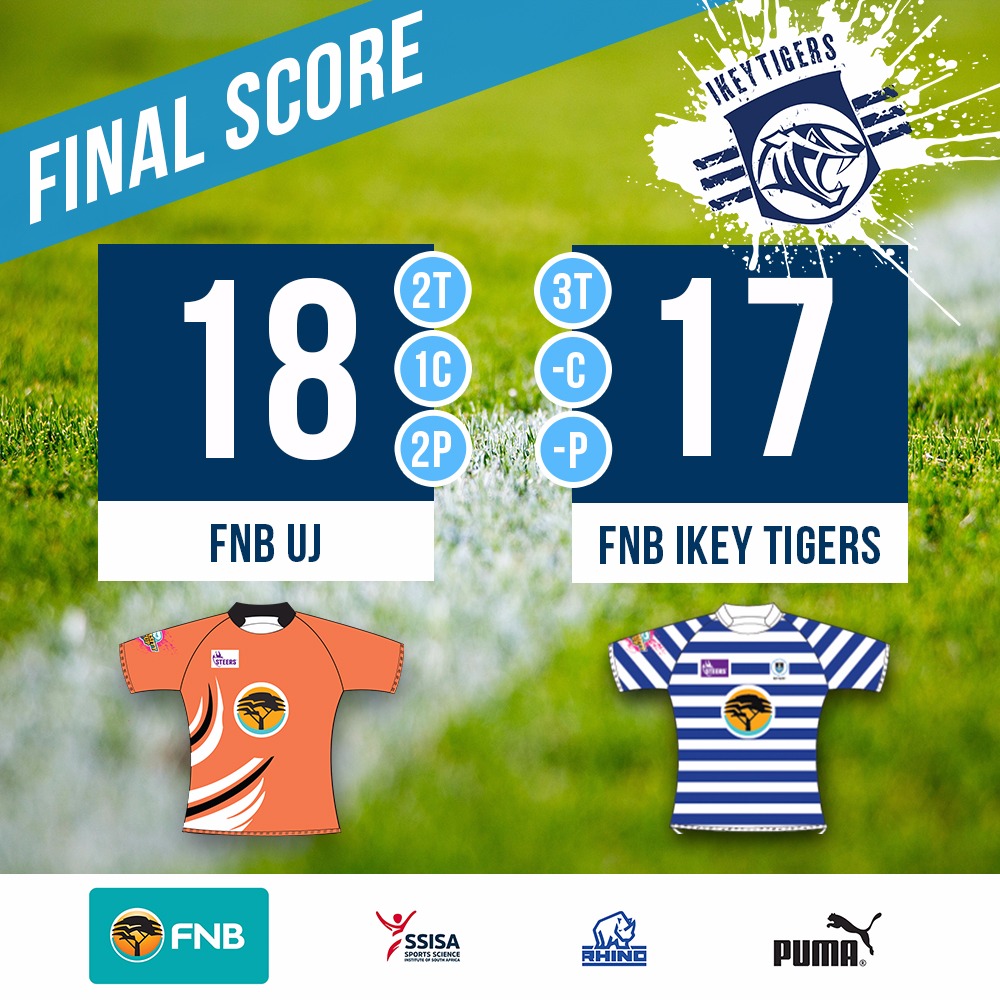 In the final round of league action in the FNB Varsity Cup it was FNB UCT who travelled up to FNB UJ in an attempt to displace them from fourth spot and book themselves a spot in the semi-finals.

The Ikey Tigers went into the game knowing that a bonus point win or a win by more than 7 would secure them a spot in the playoffs.

The opening moments of the match had a test match atmosphere to it as either side refused to give the other any advantage.

It was the home side who were the first to cross the try line as fullback Ronald Brown received a sublime offload from flanker Adriaan Bester to score under the posts. Flyhalf Kobus Engelbrecht easily added the extras.

FNB UCT refused to lie down and fought their way back into the match through some dominant passages of play from their forwards. Scrumhalf Pieter Schoonraad was the first player to score for the away side with an excellent sniping run from the base of the ruck. Unfortunately flyhalf Lohan Lubbe was not able to add the extras.

The Ikey Tigers then had momentum and forced FNB UJ to do a lot of defending in their own half. The forwards from FNB UCT then produced a moment of magic with a scrum in the corner 5 metres out. They walked over the FNB UJ forward pack and Eighth Man Nyasha Tarusenga scored from the back of the scrum.

Lubbe missed another tough kick from the corner but the away side had done enough to go into the halftime break 7-10 ahead.

In the second half it was FNB UJ who opened the scoring with Engelbrecht slotting two successive penalties, in typical test match fashion, to take his side back into the lead at 13-10.

FNB UCT weren’t done yet though and replacement lock David Meilhuizen scored the side from Cape Town’s third try of the night after an excellent offload from winger Joel Smith. This time Lubbe had no trouble adding the extras as FNB UCT went ahead again with the score at 13-17.

The atmosphere in the stadium grew real tense as the home side knew that another try from FNB UCT could completely take the game and their place in the semi-finals away from them.

However it was not to be for the side from Cape Town as the home side had the final say in the game after outside centre La Grange broke the line before offloading to winger Tatendaishe Mujawo who scored the final try of the game.

So it was FNB UJ who walked away with a narrow 18-17 win over FNB UCT and booked themselves a semi-final date with FNB NWU Pukke in Potchefstroom.

Looking back at the season a few narrow losses after being in strong positions is what ultimately led to FNB UCT missing out on the playoff positions.

But the side from Cape Town have come a long way from the side who finished second from the bottom in the competition last year and have gone a long way to restoring pride in the blue and white hoops.

Fans can go into the 2019 season optimistic that their team, should they retain the strong platform laid down this year and fix a few areas going forward, could be hosting a home semi-final on the Green Mile next year.