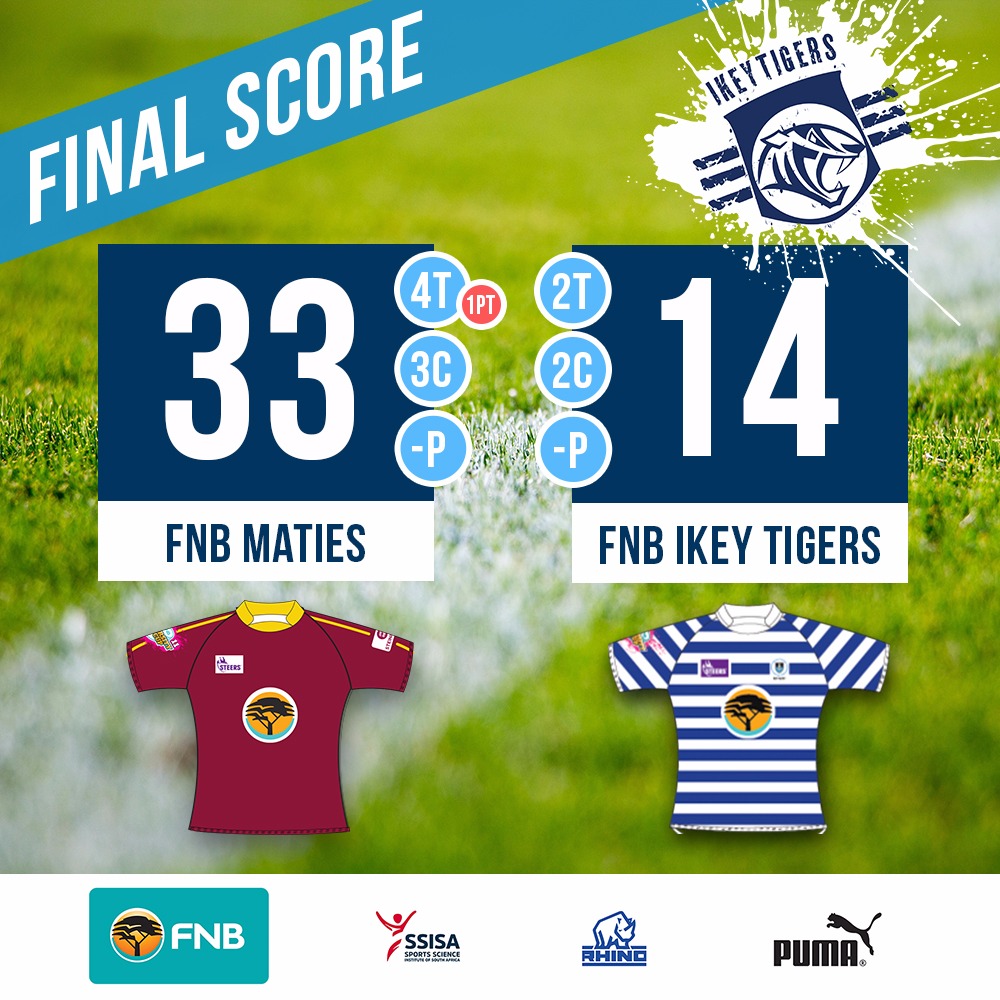 Round 6 of the FNB Varsity Cup saw the 106th Cape Derby play out between Stellenbosch and UCT. The home side, current log leaders of the competition, came into this match oozing with confidence and hungry to hold onto their unbeaten run.

More than 100 years on the match up gave us the same old physicality and ferocity that we could expect from these two sides.

FNB Maties started the game strong with a sensational 7 point try by their talismanic winger Duncan Saal very early on into the game. The kick unconverted meant FNB Maties held a 7 point lead early on.

FNB Ikey Tigers seemed to switch on after that score and patiently worked their way into the FNB Maties 22 earning themselves a scrum. Nyasha Tarusenga broke beautifully off the back of the scrum and looked set on scoring the side from the Cape’s first try before he unfortunately knocked the ball on over the line. A score at this stage of the game for the away side may have given them a lot of confidence going forward.

But FNB Maties were quick to knock the wind out of the FNB Ikey Tigers sails with a strong scrum close to the line resulting in a penalty try to the home side. Their forwards continued to physically dominate the match and two more quick fire tries before the end of the half meant that the FNB Ikey Tigers went into the halftime break 26 – 0 down.

The second half began with a bang and the home side proved yet again why they are undefeated thus far in the competition, a try by lock Janco Venter stretching the lead out to 33 – 0.

FNB Ikey Tigers refused to lie down and worked hard to earn back some dominance off the set piece. A strong drive off the back of the back of a solid lineout meant that hooker Cuan Hablutzel earned himself yet another try this season, with Karl Martin adding the extras.

The home side then had to defend valiantly with the FNB Ikey Tigers continually knocking on the door trying to barge their way back into the match. The forwards worked incredibly hard to walk over the FNB Maties scrum and force a turnover in possession. This then led to a moment of individual brilliance from reserve scrumhalf Stefano de Gouveia who scored a wonderful try under the posts.

Lohan Lubbe then added the extras but it was too little late and the match ended with the scoreline at 33 – 14. The away side can be proud of their efforts having lost out to a side who look like strong favourites to win the competition this year.

FNB Ikey Tigers now have a bye week which they can use to regroup and refocus before their last 2 games of the season. Next they face FNB CUT and they’ll want to use that match as an opportunity to get back to winning ways.

FNB Ikey Tigers will have to treat these last two games as knockout matches should they want to end up in the playoff spots at the end of the round robin stage of the competition.