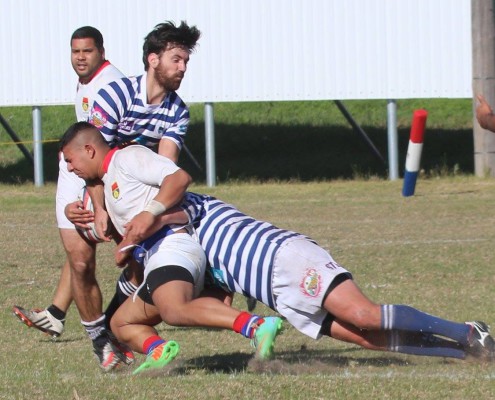 The FNB Ikey Tigers returned to winning ways on Saturday afternoon as they battled it out with Primrose and emerged victors by a score line of 36-7. Despite the end result, the match wasn’t all easy sailing as the Ikeys really had to slug it out to get over the line. This marks the team’s second win of the season, and all eyes are now fixed on Wednesday night’s match against NNK.

“We’ve got mixed feelings about the match at the moment. We’re definitely happy about getting the win, but it wasn’t a very enjoyable match. It’s always a difficult game day, but the players are relieved and happy that we’re now able to go into the next match with some momentum after our win,” said coach Christiaan Esterhuizen regarding their match against Primrose.

Their next opponents come in the shape of an improved NNK side. Despite a few injuries, Esterhuizen is confident that the team still has the personnel to get the job done. “NNK look like they have improved since last season. We’ve got some injuries, but some guys like Alva Senderayi [who is available for selection after suspension] are coming back into the squad, so we can go out there with some confidence about getting the win,” said Esterhuizen.

The game is set to kick off at 21:00 on Wednesday, the 24th of May on Jan Burger A. The team announcement is set to follow shortly, as there was a delay in its finalization due to a few injuries.

FNB Ikey Tigers look to get back to winning ways