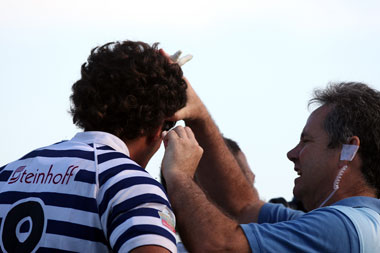 It was UCT’s third win of the season – to go with their 30-30 opening-day draw against Shimlas – but the Ikey Tigers mentor was in no mood for celebrations, despite his team ending Week Four in second place on the FNB Varsity Cup presented by Steinhoff International log.

“It would be churlish not to give credit to TUT who are a vastly-improved side – based on recent years – and who will, no doubt, win a game or two in this year’s tournament. But, to be frank, we were shoddy and probably diabolical,” Dobson told Howie Kahn.

Dobson, who has been in charge of UCT throughout their Varsity Cup history, continued: “We were so shoddy it was embarrassing… which is how I felt for those who turned up to watch. I was concerned with our poor work-ethic in the first half, yet I had no idea the second half was going to be something out of 101 Auto Wrecks!

“I think this was our worst performance in our Varsity Cup history, but hopefully that is now out of the way,” he added.

“Hopefully, also, our players now realise that there are no ‘gimmes’ in this tournament and they have to turn up every week – no matter who they’re playing against.”

One could have some sympathy for Dobson’s charges who played in almost gale-force conditions at the notorious Green Mile on Monday, having also played two games in the aptly-named ‘Windy City’ of Port Elizabeth, with another home game at Groote Schuur ‘sandwiched’ into the middle.

“We have played all four of our games in strong wind this season and it really blew again (in Cape Town)… mind you so did the referee – I think there was a stupefying total of about 40 penalties or free-kicks,” said the Ikeys coach.

“But we’re looking forward to a still day in Johannesburg next week,” added Dobson. “Still in terms of wind, but not in terms of ferocity – this is a very good UJ side who are obviously clear semifinal favourites and no doubt on a high after their deserved win over Pukke.”

The UJ-UCT match – which is shaping up as the Game of the Week (in Round Five) kicks-off at 6.30pm in Johannesburg next Monday and will be televised live on SuperSport One.