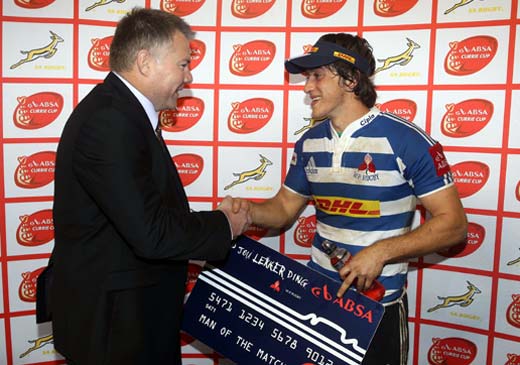 UCT’s new Western Province star Demetri Catrakilis has been selected as the Currie Cup Player of the Month for August – as the Varsity Cup winner’s dream season continues.

Having joined FNB UCT this year, ahead of the 2011 Varsity Cup, the 22-year-old flyhalf ended the tournament as the leading points-scorer with 136 points and a winners’ medal to boot.

The former Racing Metro (Under-23) and False Bay star also walked off with the Man of the Match Award in his team’s epic 26-16 Varsity Cup Final win over FNB Tuks in Pretoria – where he contributed 16 points.

August, however, was to be his month and Catrakilis received the majority of the Player of the Month panel’s votes for his standout performances during the second month of Currie Cup action.

The unerring boot of the young flyhalf saw Western Province claim a thrilling 28-26 victory over the Golden Lions to end their unbeaten streak at Newlands on Friday, August 19. Catrakilis, in fact, kicked a perfect seven from seven off the tee and slotted a drop-goal in a match-winning 23-point haul to hand the Johannesburg side their first loss of their Currie Cup campaign and end the hosts’ two-match losing streak in the process.

Catrakilis has started all but one of WP’s matches this season which currently sees him occupy second place on the overall points-scoring tally with 100 points – just seven points behind the Sharks’ Frédéric Michalak.

Meanwhile, former Maties star Josh Strauss (now of the Golden Lions) and the Sharks’ Marcel Coetzee lost out to Catrakilis in the Player of the Month Award, whilst the Lions’ John Mitchell was voted as the Coach of the Month for August.