You are here: Home1 / Club News2 / Catching up with 2021 VC Captain, Liam Greenhalgh 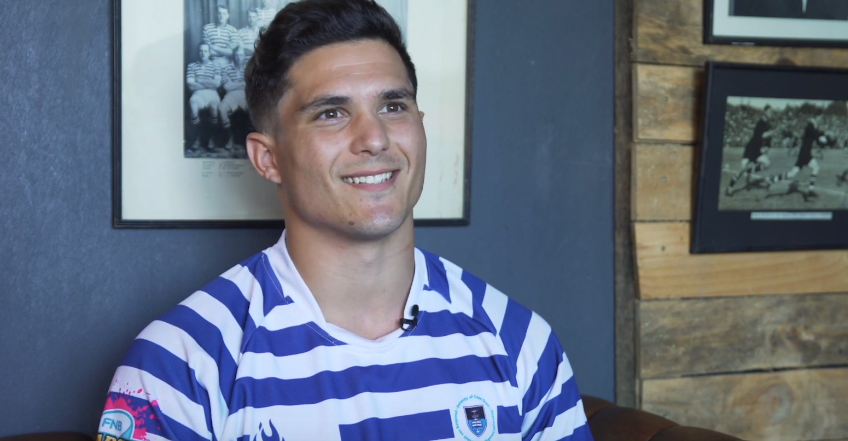 Varsity Cup will likely be very different to previous years (no crowds, no home-field advantage etc). Are you expecting any of the changes to have a big impact? How has it changed the squad’s prep? Or is it just business as usual?

With everyone playing at the same venues, staying at the same accommodation, and playing in very similar weather conditions, I believe that this will level the playing fields dramatically. We aren’t going to play in the beautiful Green Mile gale-force wind, nor play in front of 16 000 fans at the Danie Craven, which I believe is a positive.

We have adjusted our preparation accordingly in the sense that we are going to play in a high altitude with minimal wind. This encourages expansive rugby with a good kicking game, and we will look to exploit this throughout the whole competition and just make small adjustments depending on the type of team we are playing against.

Some teams find pre-campaign/match rituals to be an important part of the prep. Are there any rituals that you have as a team leading up to a campaign or before a match? Who has the weirdest pre-game ritual in the Club?

In terms of pre-campaign rituals leading up to Varsity Cup, Tom Dawson-Squibb, the head coach of the first team, ensures that we all connect properly in the form of a “camp”. For two years running now, we have had our camp in Hermanus at the Windsor Hotel which has successfully connected our team socially and mentally.

Although the players get up to interesting antics during our stay at the Windsor, the staff seem to adore us, and I would not be surprised if it becomes a campaign ritual to go the Windsor before every Varsity Cup in the years to come.

For pre-game rituals, I’ve seen a few interesting ones at Varsity over the years such as Matt “Kitty” Andrews not playing a single game without vomiting and Cuan Hablutzel eating the entire packet of jelly babies that has been put in the changeroom for the team before the game.

The current squad don’t get up to any weird antics before games from my understanding. Everyone is quite switched on and just getting in the right headspace before games which consists of listening to music, relaxing or chatting to the guy next to them.

Can you give us a bit of a hint of what your squad looks like this year? Any team members from last year’s squad returning? What does the squad selection say about the way the team intends to play in this VC?

We managed to retain many players from last year with 22 players of the 42-man squad having first team caps. Although we lost the veterans, Cuan Habluztel, Busanda Mabenda, Rayno Mapoe, Gerard Pieterse, Nama Xaba and Dave Meihuizen, we have retained influential players like Gary Porter, Niel Otto, Ashwyn Adams, Kyle Bowman, James Tedder, and Athi Gazi. We have some exciting new recruits like Evardi Boshoff, Le Roux Malan, and Mike De Marco who have all shown great things at training and in warm-up games.

The squad selection will represent a fair amount of experience which will hopefully translate into the game model we are trying to achieve. The game model is simple and will require perfect execution to be effective. It also needs all the players in the squad to be confident and composed from minute 1 to minute 80 in order to work and this is where I believe experience will be crucial.

You’re going to have to isolate as a squad – who’s the one player that will drive everyone nuts and why?

Isolating together at the accommodation is going to have its challenges, I’m sure, but I think if you’re one of the unlucky ones who gets a roommate who snores that could send you up the wall for the entire time while we are there. I’m not naming any names but there are a few in the team who snore.

With the COVID restrictions has it been difficult to bond as a team? How do you think a year of limited full-contact training will affect team performance? Are there any hidden benefits/opportunities that COVID has brought about?

It has been incredibly difficult to bond as a team. Our head coach completely and utterly believes that if you cannot connect off the field well, that you can’t play as a team well. However, as I mentioned earlier, luckily we were able to bond nicely as a team in Hermanus as we timed COVID tests well and took the necessary precautions to limit contacts.

From a team performance point of view, the only area where I think limited contact could affect us and all the other Varsity Cup teams is with limited scrum training as you can only have live scrum training soon after COVID tests as it is the biggest risk with regards to being in close contact. All other forms of training are of minimal risk. So we are working extremely hard with the opportunities we get to scrum and I believe we will have a solid scrum this year to attack and defend from.

Hidden benefits; I think the ability to have a quick meeting on zoom here and there on a non-training day gives us the flexibility as a team and management to be more connected, which is great in my eyes.

A walk down memory lane with Ikeys and Wits – the two traditionally English...
Scroll to top