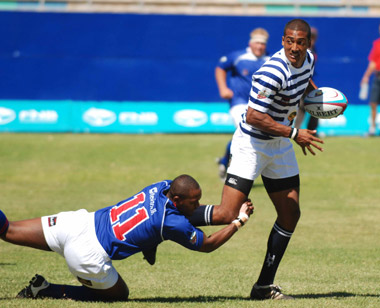 Brache to further upgrade his stripes?
A young and talented Western Province Currie Cup squad was announced this week and it includes no fewer than seven Ikey Tigers. The surprise package being young center / fullback Marcel Brache who has made a meteoric rise since late last year, when he was playing Internal League rugby for the Nadoes.

The other Ikeys in the mix are the evergreen Hanyani Shimange and a host of exciting youngsters in Martin Muller, Yaya Hartzenberg, Nick Koster, Tim Whitehead and Tiger Bax. While Bax, Muller and Tim Whitehead have all played some S14 rugby before, this is their first chance for some Currie Cup action. Tim “Toolman” Whitehead in particular will be looking to make his mark in the absence of three WP Springbok centers.

There are plenty of opportunities for the other UCT backs in contention to step up, as the WP backline is facing a major reshuffle with almost the entire first choice line-up playing for the Green and Gold of the Boks in the Tri Nations.

The full WP 35 man squad is as follows: