Blog - Latest News
You are here: Home1 / Newsflash2 / Brache in WP side to play Lions 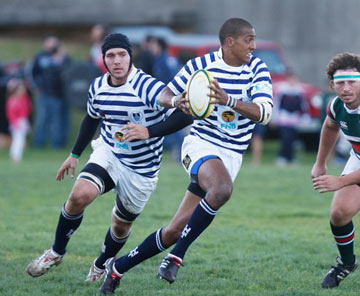 UCT star Marcel Brache has been called up to the WP bench for Friday night’s Currie Cup encounter with the Lions in Johannesburg – capping a fairytale rise for the former Internal League star.


Last year this time, Brache was playing in UCT’s Steinhoff Internal League for the Tornadoes – until he was spotted by then Ikeys head coach John Dobson who thought he had something special, reports varsitycup.co.za
Brache was invited to train with the Ikey Tigers Varsity Cup squad and, after impressing in a pre-season friendly against the Stormers, was handed a start in UCT’s Varsity Cup opener against Shimlas.
To steal a well-used cliché, the rest – as they say – is history, with Brache featuring in every one of UCT’s matches during the 2010 Varsity Cup; his elusive running, deadly defence and long-range goalkicking helping his team into the final where they went down to the Maties.
Since then, he has been training with WP – and also playing for UCT – even earning a first provincial start in a pre-season friendly against the Griffons in July.
Now, however, the talented outside back is on the verge of what would be a stunning Currie Cup debut – yet another feather in the cap of the Varsity Cup AND the Steinhoff Koshuisrugby Championship.
When contacted by varsitycup.co.za this week, a clearly elated Brache said: “When my name was read out my jaw literally hit the ground!
“It’s been a boyhood dream of mine [to play for WP]… Just to be in the 22 is an honour – even if I don’t play.”

The former Rondebosch Boys’ High School pupil (who mostly played second team rugby at school – with cricket his preferred choice) played at outside centre during the Varsity Cup – with the odd game at fullback – and even turned out on the wing during the initial stages of the 2010 WP Super League for the Ikeys.

Well done Brache! What a hero!
Scroll to top